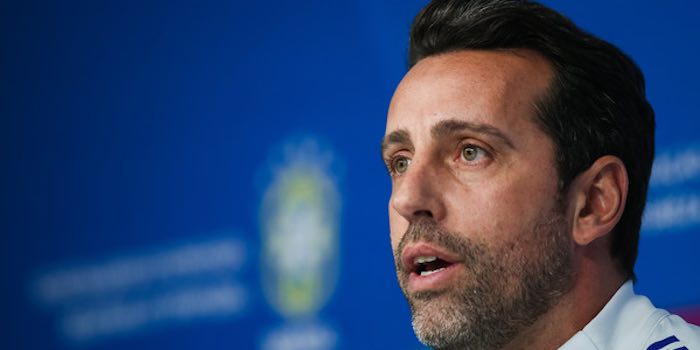 It’s not known exactly when Edu will be officially appointed as Arsenal’s Technical Director, but it’s now abundantly clear that he will leaving his position with the Brazilian national side and returning to the club with which he won two Premier League titles in the early 2000s.

Having triumphed in the Copa America, the way is clear for the 41 year to pack his bags and come back to North London, and speaking after the 3-1 win over Peru, Cléber Xavier – assistant to Tite – told reporters that a replacement was being sought.

“Now a new executive comes to take Edu’s place,” he said, alongside some other stuff which doesn’t make a lot sense through Google Translate, but isn’t in any way relevant to Arsenal.

The arrival of the former Gunner has been widely expected for some time, and there are suggestions that he was involved in the signing of young Brazilian Gabriel Martinelli who was officially announced as an Arsenal player last week.

With just a month of this transfer window remaining, and having been focused on the Copa America, it remains to be seen how much influence – if any – Edu will have on our business this summer.

Having only finalised one deal (Martinelli), there are plenty of issues still to deal from an incoming and outgoing point of view, so there’s work there straight away as and when he arrives.

There are the logistical details to sort out too, packing up, moving his family, and settling into life in London again, so realistically his work might not begin in earnest until after this window closes.

Is it possible that the club has been waiting for Edu?

It’s only fair he gets a holiday. The rest of the staff are on one so it only makes sense.

To be fair the window is only a month longer now. Work this month then you have your holidays when the window closes. And it’s cheaper ;p

So things are now moving fast without anything actually happening. It’s like having a running stomach and constipation at the same time. Outsmarting the market.

But to be fair this is the most crucial period of the year for all administrative staff. A new technical director should have done his homework already and hit the ground running now and then take a holiday for a week or two maybe a couple of months into the season. I feel taking the next flight to emirates and sorting us out before the start of the season should be the highest priority for him.

Not blaming Edu. Was referring to the whole mess at the club. New season is a few weeks away and you’d think we are ready to defend our title

Much Edu about nothing, really.

How long have you been waiting to say this?

As long as it takes Arsenal to make a top quality signing?

The only transfer business done so far seems to involve Edu as well. So, not sure about packing, moving, settling to start work. It probably is catch a flight, do some shopping – clothes, essentials and players, finish the transfer window, go on holiday + move to London!

Announce soon with Edu’s first signing being Everton Soares!. A gooner can only dream!

Jesus we can’t even do this right

What does that even mean…I don’t understand the negativity around everything connected to Arsenal. It’s actually bizarre.

Honestly it is the fact that we clearly need to strengthen, seemingly have no money, are already into preseason and are yet to buy (or sell) a single player apart from a teenager from the Brazilian lower leagues. We made two low bids which were always going to be rejected and at the moment it seems we’ve made no further offers and are instead trying to sign a teenage CB who won’t be available to play for us for another year. To be fair I don’t know what is going on behind the scenes but right now I can’t see… Read more »

Well there’s no point in worrying. It’s annoying though.

It’s true on paper we have some very good players

What’s there to be cheerful about, my team is in a right state and it don’t look like its gonna get better anytime soon,

Why? We had to wait till Copa America was over as he was coordinator for Brazil

Is it possible that the part of the statement you missed because of Google Translate was that Alisson, Marquinhos, and Casemiro had all decided to follow Edu to Arsenal?

Plus Martinelli from division 4 Brazil, the latest ‘wonder kid’.

This kid is good trust me

Please bring neres,everton and ziyach with u. Lets get rid of ozil iwobi eleney chambers and jenko. Replace them with brazilians. Mmm coutinho comes to mind

Brazil is never short of talent. Let’s hope this is the start of a new Arsenal with players from over there.

He does not have sufficient experience to bring to bear currrently.

We have an overly fussy set up with Caggagio, Raul, Vinai all involved in some capacity. None are fundamentally experienced in transfers …scouting and football relations being very different animals.

We frankly would well do with a Campos at Lille (the ambition of the French club) with experience to bring deals across the line against a relatively frugal budget.

BUT such is our owner’s ambition that we prefer to cut corners add unnecessary layers (of culpability) and skimp on actual capability.

Edu will head us in the right direction

You don’t know what a Technical Director does?

One of two things has happed. Option 1: The club already had their targets this season and Edu is coming in for the future, not for this summer. Option 2: Edu has already been in contact and given his opinions on targets already.

There’s no Option 3 which is where most people are stuck – ie: he has 30 days to do everything. To think he could research and execute inside 30 days in silly. I know we’re all hopeful but that’s just not going to happen.