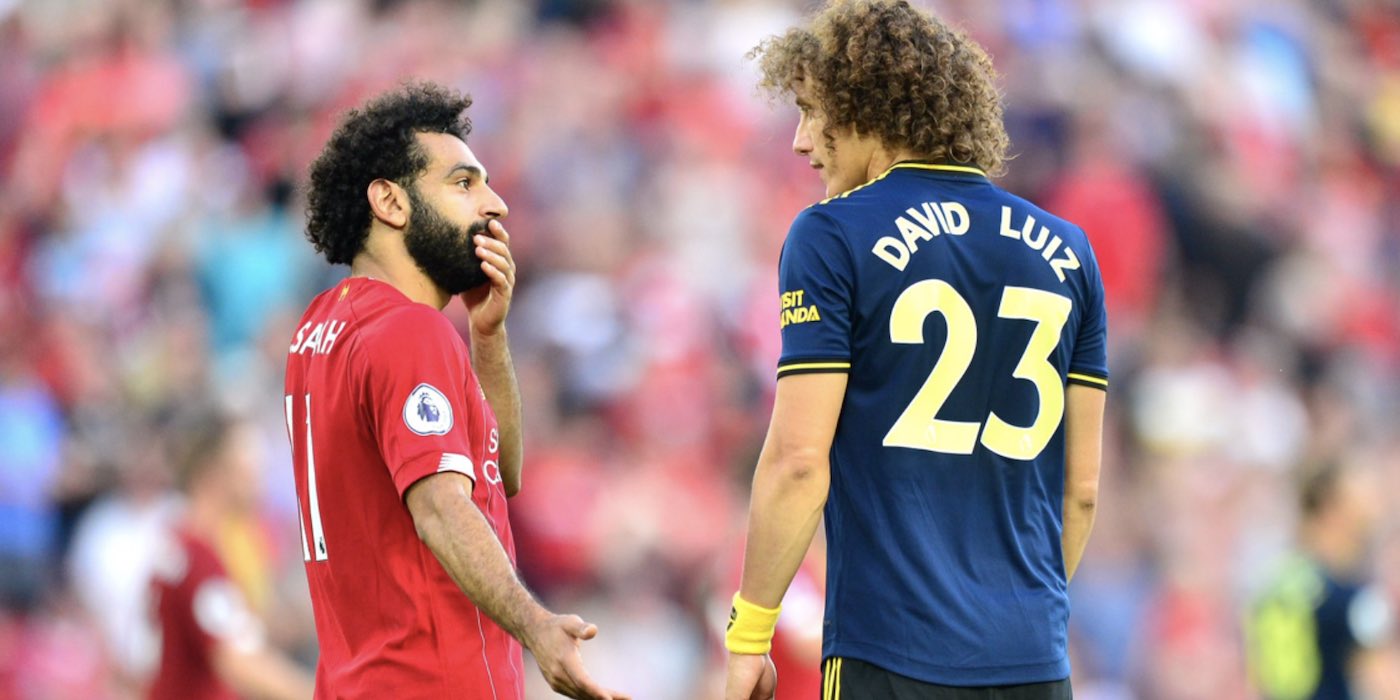 Unai Emery says he’s happy with the way David Luiz has adapted to life at Arsenal even though the Brazil international was twice caught out by Mohamed Salah’s trickery in last weekend’s 3-1 defeat to Liverpool.

The £8 million deadline day signing from Chelsea seemed to suggest a penalty should not have been awarded after he pulled the Egyptian’s shirt in the box just after half time and was at fault nine minutes later when the Reds striker spun him on the halfway line in the build-up to his second.

While Luiz was roundly criticised for being done like a kipper, twice, his boss says the defender’s mentality and ambition will be a positive for the squad.

“It is not easy for him, the adaption to us has been very quick, but I am very happy with him,” Emery told press ahead of Sunday’s derby with Sp*rs.

“His decision is very ambitious to come here and be with us, and he wants to help us.

“We can speak about some fault with one player or another player, but we can also talk about some good decisions and very good actions in each match from one player. And with him it’s the same.

“He was intelligent and we can speak about positive decisions and we can also speak about the goal. We are in our way and I like and want his mentality.

“I want his ambition. I want to transmit the ambition from him and me to other players. After we can be competitive.”

Despite his poor day at the office, Luiz is likely to start in the centre of defence this Sunday when Sp*rs visit the Emirates. It remains to be seen whether he’ll retain his place after the international break with Rob Holding set to return to action following his recovery from ACL surgery.

Giving an update about the England under-21 international, Emery said: “Rob Holding is training with us, playing with the under-23s but he is not 100 per cent to play on Sunday with us.

“We think now he is getting better, he can play one match but not with the intensity we want on Sunday, for example.”

I dunno….at his age he is an older version of Mustafi. There will always be a calamitous mistake here and there. Mustafi also put in plenty of game saving blocks, intercepts and brought aerial power to our backline, deep distribution from the back (he was one of the main outlets for the backline) BUT there is always that mistake in him. Ditto Luiz. The good news it seems is that Holding is on the way back in completing the 90 mins against U23 Everton. BC if Sokratis gets a knock or more likely suspension, we are then down to Chambers… Read more »

It’s like we’ve never given away a penalty before.

There are far more positives about Luiz than negatives. Which is why pretty-much everyone thinks getting him in was such an amazing piece of business.

I didn’t like him when he was playing for Chelsea, but now he’s ours – he’s properly ours.

Hint, the guy you replied to doesn’t actually exist. I decided that last weak and my Arseblog existence is already much improved thanks to it. Not telling you what to do of course but I can recommend it.

He’s a winner, as Emery said, ambitious and a leader.

All things we have lacked in the past few years

Sorry but the penalty he gave away against Chelsea was brainless. Getting caught the wrong side of Salah for the second goal was also brainless. This was a calamitous performance, as bad as any performance Mustaphi has given. I’m not one to be overly negative but Luis is and always will be an accident waiting to happen. I’d have zero confidence in any defence that he’s a part of. These mistakes are guaranteed with him.

Brainless? Pool, not Chelsea.
And? Mustafi, with an ‘f’.

But thanks for playing! :see_no_evil:

Emery should have replaced Luiz after the yellow card instead of explaining he was condemned to bad or weak defending. We could have salvaged a point.

To be fair for the most part he has looked very good. Plenty of players get skinned by Salah so the second one isn’t the worst error I’ve seen given the circumstances.

Even if we have to put up with the odd howler he has a long way to go before he is as bad as Mustafi, who was doing it all the time.

Luiz does seem to have the character to bounce back from it, which seemed like a major problem for Mustafi. He looks a better player overall too, mistakes not withstanding.

I agree. I wasn’t particularly happy with the deal when it first came about and despite warming to it now I think we can all agree he wouldn’t be no. 1 choice. But some of the language being thrown around was/ is ridiculous- ‘howler’ and the like. I’ve been mostly satisfied with him so far- if he starts giving away pens against (with all due respect) Norwich or Villa then we’ve a problem, but cut the man some slack!

First? He wasn’t ‘happy’. He was stuck with Mustafi. Injuries made certain the nearly indestructible, self-combusting #20 had to play almost full-time.

Luiz did a lot that was good too.
Kinda’ peeved at anyone likening David to ‘he-who-gifts-points-to-Palace’.

There was a clear tug on Pepe’s shirt in the are (by VVD, I think) but that wasn’t given as a penalty, so I get what Luiz was saying when he complained about it. We need consistency.

Emery is obviously not the man to take us forward…i just pray sanhelli sees this and make him step away…there are better coaches out there Erik ten jag, allegri,eddie Howe, nuno espirito….if Emery continues after this season we might regret the decision in a long run.. I’m very sure of this

Your comment makes me want to say “oh fuck off with your early manager out bollocks” but I won’t as that may be construed as rude. ?

Hahaha changed your name but your words give it away. The move of a coward! You are the one who is creaming for the ajax manager. Nice try but you’re more than transparent. Grow up please son.

I’ll be happy with him when we do one up those cunts down the road at least 5-0 please!

1. He’s not perfect, we knew that.
2. He’s still an improvement on what we had
3. The season is too young to start writing anyone off.