Arsenal Women began their Champions League campaign with a resounding 4-0 win away at Fiorentina in their round of 32 first leg. The tie is almost certainly beyond the Italians now as Joe Montemurro and his team look ahead to a tricky away game at Manchester United on Monday evening. Tim Stillman takes a lot at the takeaways from Arsenal’s Italian Job…

Arsenal lined up with a back three and a half…

Joe Montemurro is always good for a tactical tweak and he didn’t disappoint in Florence. Upon seeing the starting line-up, the assumption was that the Gunners would start with a back four of Leonie Maier, Leah Williamson, Jen Beattie and Katie McCabe. However, it was quickly clear that Leah Williamson was stationed around 10-15 yards ahead of the defence. 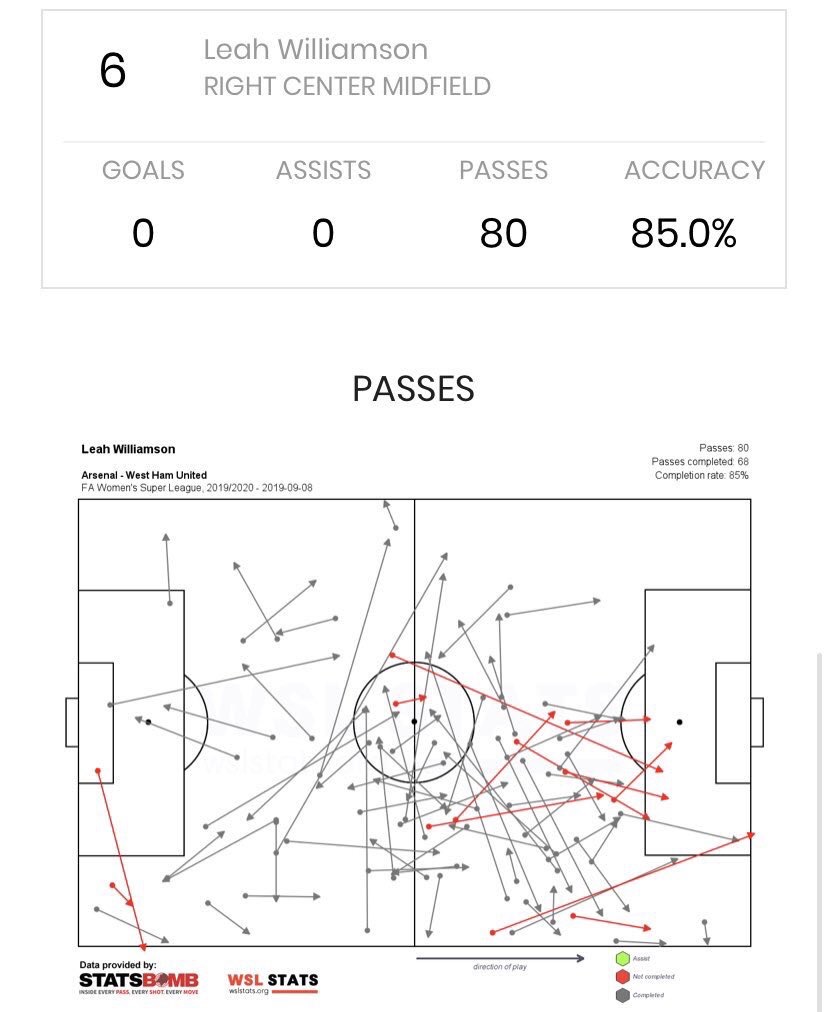 Leah started in midfield against West Ham in the continued absence of Lia Walti, where her passing was neat and forward thinking. On this occasion, she was played in a sort of defender / midfield hybrid position. She rarely strayed forward from the centre circle, but was also rarely on the same defensive line as Jen Beattie and the full-backs.

Leah sat deep and allowed Jill Roord, Danielle van de Donk and Kim Little to play further forward, while guarding against the counter attack, which Fiorentina tried to enact with long balls. Leah sat to create a passing lane to the midfield but also to buttress the defence, with Jen Beattie playing as a defensive mop. It was a brave strategy to have Maier and McCabe essentially in a back three. Arsenal anticipated that Fiorentina would sit deep and look to counter through the middle when they did have the ball.

The link-up between Kim Little and Vivianne Miedema remains strong…

Miedema scores when she wants.

She received the ball inside the area and faked to shoot, before finding the bottom left corner as she fell to the floor. What a player ??

Prior to having her leg broken last October, Kim Little played in an advanced role for Arsenal, where her understanding with Vivianne Miedema was very strong. The two players have a natural understanding and like to play off one another. With Jill Roord, Danielle van de Donk and Jordan Nobbs available, there is quite the competition for the number 10 spot.

??? This is superb from Kim Little and @ArsenalWFC…

Little’s passing range means she is often deployed in a deep lying playmaker role, but I prefer her higher up the pitch where she can make those connections with Miedema. Kim set up Viv’s first goal and the Dutch striker returned the favour for the second. Little is a world class player and her penalty record (she’s only missed one in an Arsenal shirt) shows how meticulous her finishing is too.

Miedema plays a wonderful flicked pass into the path of Little, who fires a snap shot into the bottom right corner.

Arsenal were able to conserve energy…

Miedema makes it three. There's no stopping her.

Arsenal have a gruelling schedule to open the season with a pair of Champions League ties, an away match at Manchester United and a Conti Cup group match against London City Lionesses. Montemurro spoke about playing Jill Roord in a slightly deeper role in the second half of the victory over West Ham to help her to preserve some energy.

This was a gentle workout in Florence with Arsenal dominating the ball. Montemurro rested Miedema against West Ham and subbed her after 60 minutes in Italy, while Danielle van de Donk was also replaced well before the end against Fiorentina. Montemurro ought to be able to rotate well for the London City Lionesses match and could entertain resting anyone carrying knocks and bruises for the second leg of this tie. Part of managing the schedule is to control the matches and not allow them to become as frayed as the final 20 minutes became against West Ham. Montemurro’s decision making has shown deference to the schedule so far.

Lisa Evans fires home from inside the area and makes it four.

Previous articleTierney and Bellerin return to full training
Next articleCeballos: Front three can make the difference for Arsenal

That forth goal in particular was pukka

Thanks for this Arseblog! A big part of my growing interest in Arsenal women and Women football in general is what you guys do here. Thanks Tim. Really appreciate.
#COYG!

Love the first time strikes from Lisa and Kim – defense had no time to react. Miedema’s anticipation and awareness is what makes her so dangerous – COYG

Impressive performance, interesting line up! What will Joe do with Leah when Lia is fit? Maybe a back 3 with Jen in the middle plus two flying wingers and a defensive play-making midfield installation is how to play European games. I suspect a more conventional back line will be required in WSL.
Hopefully this is the start of a Champions League run to give everyone sufficient game time to feel valued.

Fantastic stuff from the AW. Why do I ever worry about our girls? The automatism and fluency were back and we were a delight to watch, especially after Thanks for the summary, Tim. 3 at the back, you say? Sometimes it looked like a 1-9 formation! I love it when we just go for it. Question for Tim: How did you think Jen Beattie played? I thought she was exceptional both as an individual defender and with her distribution from the back. Nifty feet displayed on several occasions. I still feel Louise is our best pure defender and she showed… Read more »

*especially after the first goal*

I’ve been a huge Jen Beattie stan for years. I still think WSL coverage is enormously slanted towards English players, Beattie was the best part of the Beattie / Houghton partnership at City but she’s largely ignored cos she doesn’t play for England. I really like Lou but Jen is world class imo.

I agree Tim, I do not think we have seen the best of Jen back at Arsenal yet but she is undoubted quality. When she left us previously she was a top scorer so she has that in her locker too! Although Steph is an ex-gunner and I am aware that she has some personal problems that she is dealing with, based on recent performances unfortunately I have to consider she is in the twilight of her career. Sure she can still strike a mean free kick and make last ditch sliding blocks but the top of her ability was… Read more »

Cheers, thanks for responding.

Well done ladies, what a result! Miedema is elle phenomena

Strange she idolised Van Persie when she was young and yet turned out more like Bergkamp!

I would go watch them all the time if i didn’t live the other end of the country, I think they are fantastic 🙂

go to the away games t’up North!