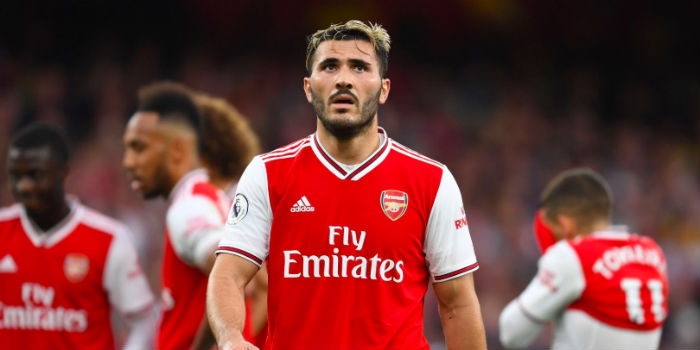 Sead Kolasinac says Arsenal are well-placed to deliver on their aim of finishing in the Premier League top four after a solid start to the season.

The Gunners haven’t exactly set the world alight in the opening eight games of the season – we’ve been far too open at the back and shot shy upfront – but a solitary defeat to league leaders Liverpool at least speaks to a vague solidity that bodes well as the fixtures start to come thick and fast.

Unai Emery’s men travel to Bramall Lane this evening knowing a win will see us leapfrog Chelsea and Leicester into third place and in the process open a six-point gap over Sp*rs and an eight-point lead on Manchester United.

Ahead of the showdown with the Blades, Kolasinac, who is predicted to lose his place in the starting lineup to Kieran Tierney, was in bullish mood.

“We have had a solid start and were in third place before the international break, which was our goal for then,” said the left-back. “We need to improve on a few things and we are looking to do that. We are working hard on that.”

“When we are all back, we are a really strong team. It is not only the 11 on the pitch, it is also the people on the bench, the people that are not in the squad, the whole club.”

Kolasinac added: “The Premier League isn’t called the hardest league in the world for nothing.

“It [the race for the top-four] is pretty wide open. For example, Manchester City lost to Wolves before the international break. But we are just going to focus on ourselves and try to work hard to win every game.

“Who knows what will happen at the end of the season? We are still at the beginning now, but we hope to finish in the top four.”

Elsewhere, Pierre-Emerick Aubameyang, recently voted the division’s player of the month for September, says he’s not burdened by suggestions his goals have carried the Gunners so far this season.

“I feel great,” he told the Premier League when presented with his award. “I’m feeling free on the pitch. I don’t know if it’s the best form of my career but it’s a good one so I will try to keep the level up.

“I’m sure we will achieve the top four. That’s the goal. That’s our aim.”

Title race wide open
Corrected that for you.

Well this game tonight has all the positive buildup and great club PR of a woefully shitty performance.

Nobody
Reply to  Duno

You think we can compete with Liverpool and Man City? Be realistic

Duno
Reply to  Nobody

I’m not necessarily comparing us with City and Liverpool. We know you win the league by being consistent. Over the years, our target was the title and we always found ourselves in the top 4…but I digress. I have seen enough this season to suggest it’s not out of the realms of possibility. I don’t get why our target should be anything else with all our players back. All I want is a bit consistency in our performance. Opportunities only favour those who are prepared. Liverpool and City are injuries away from falling short. Moreover, how can such a target… Read more »

I’m with you, if and only if we stop starting Xhaka in midfield every single game like he is an indispensable player to our squad. Until then we aren’t contenders and have no right in claiming it.

The Xhaka thing is something I totally agree with too, sadly.

Prince Gunneralaysia
Reply to  Nobody

I am not saying that we are competing with ManCity or Liverpool at the moment. But looking at other teams, we surely deserve 3rd s place

Wide open as in at this point we don’t know which one of City or Liverpool will win it? Sure I can agree with that.

Hope that holding, tierney and bellerin make a difference. Our performances have been weak tbh

Aside from Burnley our league performances have been underwhelming to straight shit. As much as I think those 3 might help, I don’t think we’ll see a massive shift unless/until Emery decides to move his midfield setup away from Xhaka.

We really need to move away from the Xhaka set up…

I’m just dreading the team selection news and being forced to watch another dour affair driven by a completely conservative midfield to support Xhaka in doing the job any other DM does on their own and thus allowing the other two midfielders to play as proper box-to-box players and get forward and support our attack while having the pace and mobility to still get back and defend (instead of playing controlled as a secondary DM in the infamous “double pivot” and to not isolate Xhaka so we don’t get exposed on the break).

Top 4 was in the bag last season and we blew it. How about just trying to win the next game and make sure we improve our defence first. This open title, top 3-4 means nothing if we can’t beat Palace at home and struggle with Watford. Win the next fking game…

The way our rivals are struggling, the top4 race shouldn’t be wide open. But Arsenal being Arsenal we’ll for sure make it as tough as possible for ourselves.

This talk about “Top 4” drives me bad shit crazy. We’re Arsenal football club, for crying out loud! I don’t care how poor the talent is, we should always measure where we finish relative to the title race.

It’s like the club is afraid of being ambitious – Players, board, and fans alike.