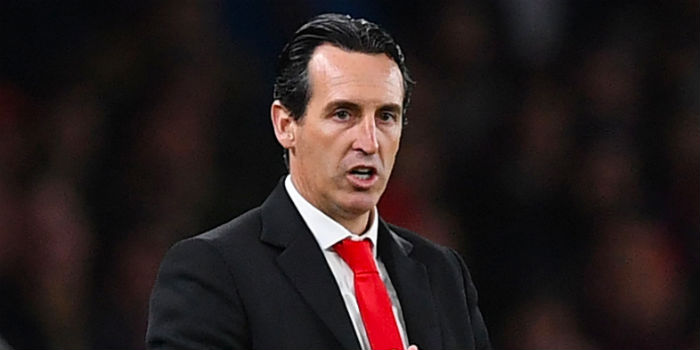 Nuno Espirito Santo’s squad proved to be thorny opponents for the Gunners last season on their way to a seventh-place finish in the Premier League, grabbing a 1-1 draw at the Emirates and beating us 3-0 at Molineux Stadium.

Blessed with pace and power in attack, they could well pose more problems in N5 even if their league form this term hasn’t quite matched up to expectations.

“They are a very strong team and their defensive structure is strong and tough to play against,” Emery said on Friday.

“Last year we drew here against them, and their transition is an amazing transition.

“Their structure is to play with that transition and then when they play, they can build up, they can use the quality players they have.

“It’s going to be a difficult match and it’s our challenge. We are preparing, we are working to improve our things and I am looking forward to seeing our team respond with our supporters at Emirates tomorrow.”

While impressed by the eye-catching result against Pep Guardiola’s side, Emery also hinted at a level of inconsistency that he hopes his side can take advantage of.

“They won at Man City’s stadium and it is an amazing result, it is very difficult to win there,” he said.

“They lost to Everton and drew in the last minute against Crystal Palace. It depends on each match. Who would have thought they would win at Manchester City? Normally they won’t.

“This is my idea in each match and tomorrow is the same. We are thinking and respecting them but above all we need to create our strongest way with the ball, with possession, with our game plan and we defensively we know we need to stop them.”

Not sure how or why there’s a mistake on Arsenal transcript but 100% certain Emery said 30% respect, 70% imposing. https://t.co/75uTaXDR0k

For the record, Football.London’s James Benge reckons the transcript of the official site may be slightly out and that Emery actually said: “….with respect for them in 30% and imposing our idea in 70%.”

It’s good to know the Spaniard hasn’t completely lost his marbles to the point when basic arithmetic about hypothetical situations escapes him.

Emery also confirmed that Granit Xhaka will not play a part in tomorrow’s game. Mesut Ozil and Gabriel Martinelli, who both impressed at Liverpool, could be part of the squad.

“It is very important to use lots of players because we are playing lots of matches, and it’s a challenge for them to show how they can help us,” said Emery.

“The performance was positive at Liverpool and I am thinking how they can help us tomorrow.”

I didn’t ever think I would see the day when picking up a point at home against Portugal’s B-team would seem like a great result.

Too Drunk To Be Offside
Reply to  Torterrier

Emery: Wolves amazing on the transition

Reasonable to say that Arsenal’s transition into a new era. has sucked.

Torterrier
Reply to  Too Drunk To Be Offside

Maybe Emery should show the players videos of Wolves’ transition in training instead of re-runs of Laurel & Hardy and On the Buses.

The Arsenal
Reply to  Too Drunk To Be Offside

He recognizes this yet we will continuously get caught on the break and probably concede at least twice from this method. Traore is going to be in oceans of space in-between Kolasinac and LUiz.

Next up: “San Marino [insert literally any side, as appropriate] are a quality side who play with big energy, and are working hard in their moment, with good progression in their way. We need to respect them and their process.”

I believe the Faroe Islands are world class!

They are certainly internationally renowned!

Emery: I will copy wolves. They are an amazing team

I wish this idiot would stop constantly building up every bloody team we play against.

Is he building evidence to say at the end of the season, “See, we finished in 15th place because, like I said, every single team we played is really really dangerous. It’s not my fault”.

Anyone else remember when we were amazing in transition? Sigh.

Have we had an eighteen year old as exciting as Martinelli since Amelka?
Maybe Fabregas; but I can’t think of a winger/striker.

If we wanted someone to organise putting a horse’s head in the Wolves manager’s bed tonight with a note on it then Emery is your man but for sorting out and motivating our team forget it!
He really has to go in my considered opinion.

As i see it, Emery loves…..Livingathedge!!

So when this dunce is moved on, who do we want? Realistically and not “Pep or bust” kind of fantasies please.

This Hasenhuttl feller did pretty well in the Bundesliga and was touted as Bayern manager. I know he’s not having a great time at Southampton but maybe that’s down to the player material. I don’t know, I’m ignorant of them and him too for that matter. Would he be a fit for us?

The Arsenal
Reply to  Twatsloch

They Just lost 9 0. And thats the name you throw out there.

Twatsloch
Reply to  The Arsenal

I’ve thrown nothing “out there”. I asked about him and the team he manages as all I know is that he has a successful background in the Bundesliga.

We have the best manager in the league at analysing other teams strengths and weaknesses.
Which makes his utter lack of ability to formulate a plan against them all the more frustrating.

Wolves could be amazing in our transition to a new manager…

90% of the game is mental, the other half is physical.

Is this a Yogi Berra quote or Unai Emery?

Yogi Berra, but it will probably be applicable to Unai by December(if still here).

Emery is just not inspiring enough. As a person. That’s his main problem. For a manager to succeed at the highest level, that’s a big quality to have, and he lacks it completely.

“Yeah we did well against livepol, mustafi did well he scored we need to see his quality he will start tomorow. With mesut, as our best player, we leave him to bench. Its a club strategy. We need to respect everything and we are scared of everyone. Basicaly we do as previously in my managerial career, and it will se me sacked in may after utterly piss poor performances we’ve done since from last spring due to my inability to coach teams succesfully. Please hang on, only 6 more months and I am out”.

I laughed out loud at this

The transcript on the official site has now been changed to read “prepare our match with respect for them in 30 per cent and imposing our idea in 70 per cent.” So, it seems it was possibly the transcriber who got their maths wrong?!

“We know they have good transition” but we’ll be caught again tomorrow with a draw or even a loss.

Emery knows that this is a very tricky game.

If Wolves can go the Middleastlands and beat the champions 2-0 then they are well capable of winning at the Grove. And another defeat will ramp up the pressure on our Spanish friend. The way we are defending you just know we will concede; it’s just a case of how many will we score. Will we win 3-2 or lose 2-3?

If we lose, and lose badly, tomorrow then I can see the atmosphere there turning really toxic.

Funny how my comments went from being moderated to not being posted, maybe it’s cause I’m calling out some biased journalism

Maybe Emery’s the sort of manager who expects his staff to give 120‰?

You know, the type usually referred to as “a git”.