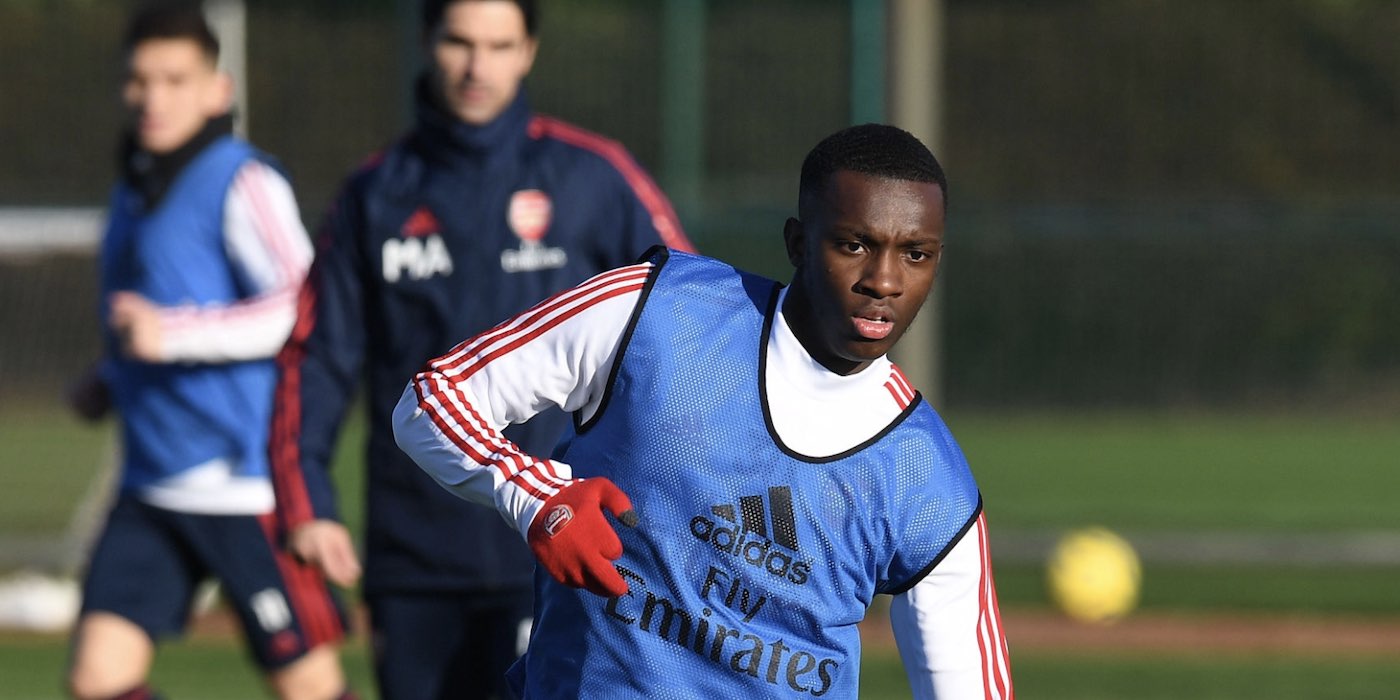 In the wake of Pierre-Emerick Aubameyang’s red card against Crystal Palace, it was suggested that Arsenal might want to hold onto Eddie Nketiah rather than send the young striker out on loan again.

Having been recalled from his spell at Leeds, there are a number of clubs interested in taking him for the rest of the season – including a couple of Premier League outfits.

However, the short-term issue the captain’s absence causes isn’t likely to change the club’s plans, as they look to develop the 20 year old for the future.

Speaking about the chance of Nketiah staying, manager Mikel Arteta said, “I think we have to think long term with Eddie.

“We have to respect his evolution, his development and we don’t have to make decisions just based on two or three games.”

Arsenal have yet to make a decision about where Nketiah will go next, although Bristol City – who were keen to take him during the summer – are favourites.

Aston Villa’s need for a striker following a season-ending injury to Wesley means they might step up in their interest, but for the Gunners it’s about ensuring Nketiah has the best chance of playing time.

It’s expected that his move will be finalised early this week.

Watching Villa yesterday the lack of service to the front line would be a worry if he went there. Admittedly it was against citeh.

I’m more interested in their lack of strikers, which would position Eddie to play a lot. That’s the important thing, and if he’s getting these games in the Premier League instead of the Championship that would be better.

I would rather he returns to the Championship to get more playing Time, Aston Villa are in a relegation zone fighting for their Life in the premier league, let’s be realistic his playing time will be limited at Best. Championship on the other hand he will score plenty of goals and Gain More confidence. Because Strikers instinct grows when they score regular regardless of the opposition ability.

Still think Villa’s the best choice. Fact is, we know Eddie can finish. But he didn’t perform for us consistently when given the opportunity. That’s natural at this age, but to be tested in this league is important/inevitable and if he can get a handful of goals in a relegation scrap then he’ll definitely be able to contribute for the first team next year. The Championship has some challenges that he’ll (hopefully) never experience in an Arsenal shirt, but how he performs against Premier League defenders with a talent like Grealish behind him will give our manager a much better… Read more »

What? He hasn’t had his opportunity yet

+1 from me for Aston Villa. Their next 4 league games are against smaller clubs – Brighton (a), Watford (h), Bournemouth (a), Tottenham (h) – so it would be good to see how he performs in those. Villa also got a League Cup Semi against Leicester this month, however Eddie has already played for Leeds in the League Cup this season so I believe he would be cup-tied for that.

Why is everyone so keen on him playing under John Terry? Bournemouth crying out for a striker, since Wilson is bang out of form, and Eddie Howe would be a far better influence than the ex Chelsea knuckle scraper.

Should have read this before I posted, I totally agree.

Sending Eddie to john terry should be a big no, he’s already been to horrible Leeds, why can’t they find a decent club for him?

We have enough cover. Martinelli needs a start. He’s been bright and has a nose for goals. Good ball control and off ball output. Also improving is Nelson. Hopefully this will push Pepe. he’s had flashes of brilliance followed by large swaths of anonymity and his off ball output can still improve. Laca also has thus far found it hard going to get desired outcome. He’s been strong for us and the only player who can provide the sort of combative ability in the middle in congestion to act as a node ala Giroud and distribute to those around him,… Read more »

Hope Eddie becomes a good striker but some of you are crazy to think he’ll just walk into a pl club and be the #1 striker let alone championship level.

Before the season started everyone was excited about Leeds, one reason or another he hasn’t played enough. Looking for another loan. I would rather him get to a club that has minutes to give him. Idc at this point if it’s the prem or championship. Minutes are the most important.