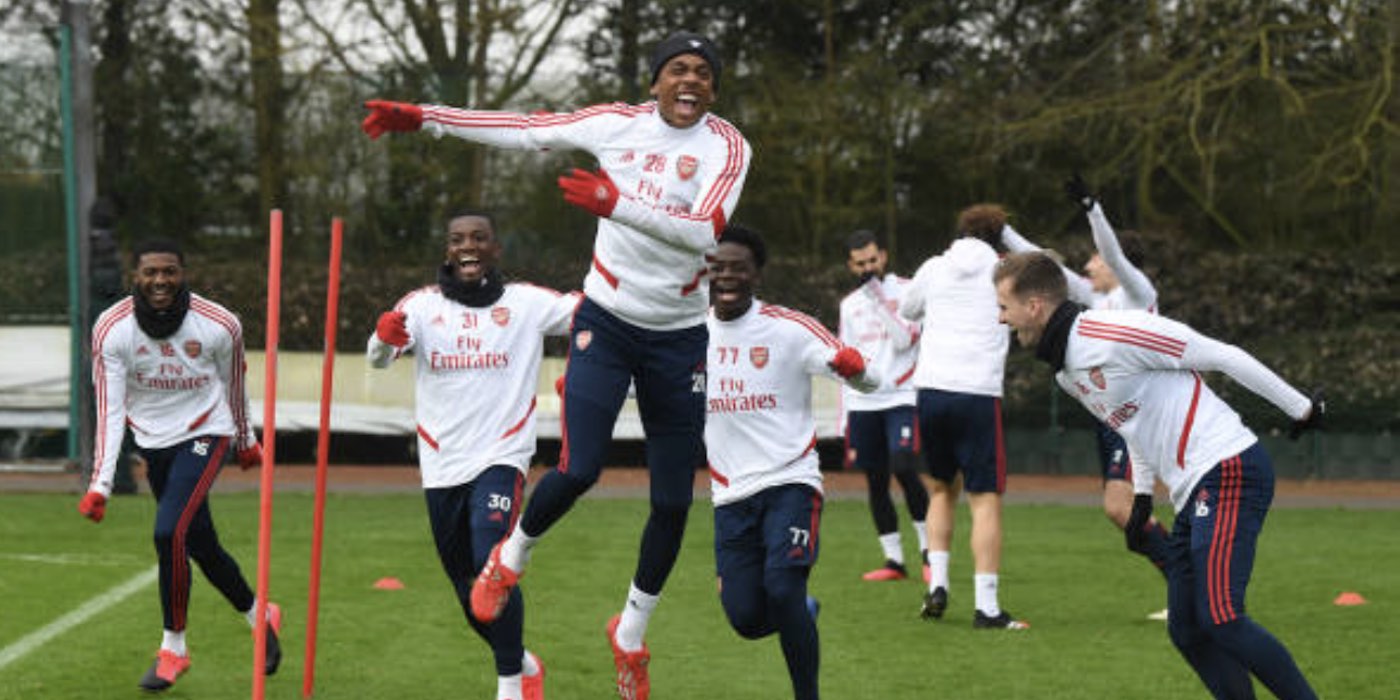 Mikel Arteta has made it clear that in his mind his team will be picked on merit rather than reputation, and that he’ll have no compunction using Academy players if they deserve a place in the side.

This season has seen home-grown talent like Joe Willock, Bukayo Saka, Reiss Nelson and Eddie Nketiah involved; the 18 year old Gabriel Martinelli hit the ground running after his move from Brazil; and further playing time for Hale End graduate Ainsley Maitland-Niles who is still only 22.

Having bolstered the squad with a couple of loan signings this week, the Arsenal boss wants genuine competition for places across all positions, and has challenged his players to give him selection headaches/

“Players are going to start games if they deserve to play and they perform at the level of this football club, whether they are academy players or not,” he said.

“This club needs competition of two or three players in each position to fight.

“If they are able to fight and compete and they are better than the other ones, they will play. If not, someone else will play.

“We have some necessities in certain areas, playing some players in positions that are not really their positions.

“With more time I would like to have specialists for every position to do exactly what we want to do.”

The Gunners face Burnley at Turf Moor on Sunday, looking for a win to take into the two week break.

The players will have some time off, but will also travel to Dubai for a training camp which Arteta will use to galvanise morale, and work on the tactical side of the game away from the hectic fixture schedule

The photograph is the best thing ever, cheered me right up. It will be interesting to see who plays on Sunday.

There could be a surprise, Willock instead of Ozil to reward him for the fantastic Bournemouth performance. I think Ceballos misses out because there’s only space for 7 on the bench. I don’t think Mari will be involved as he hasn’t played since before Xmas so possibly not match-fit.

AMN could also be rewarded with a start due to his recent good form and the fact that Bellerin is still not 100%.

It’s a football game, this is not a candy for the good guy who did a good last game.

A Ferrero Rocher if you score a goal, a Wine Gum if you get an assist, and a Skittle for a clean sheet.

Exactly! It just exudes a really happy feeling… Lovely!
Long may it continue!

about time we had a manager that plays players on merit and not on rep…The best players play for their position everyday in training and in games !! others just expect to play…. I t so refreshing to see a manager take the club back to the days where players like Adams Rocastle Merson Davis Thomas etc etc came up from the youth because of form and on merit..if you are good enough age and lack of rep doesnt matter ! You play at Arsenal because you are good enough no other reason !! well done Arteta

To be fair to Emery, i recall he dropped Ozil because he wasnt up to snuff and he got castigated for it.

He wasn’t what we needed, but he wasn’t as useless as people make out either.

Right Across Sunderland!
Reply to  Shance

Emery wasn’t a particularly good boss (for us) but I do think that some (not all) of the players downed tools because they didn’t like him/his management style.

I think those that downed tools didn’t come out of it with much credit either. If they start it with MA it won’t wash with fans. Not this time.

Hands up who thinks they are being super in the know by putting Saka and / or Martinelli in their fantasy football? ??

Now I must ask. Are you a woman?

I identify as gender Mesutral.

Love me some Hughes!

I think Ainsley goes on Loan next season. He needs that ‘click’ that Mikel was talking about for Mustafi. That comes in adversity

I’m with you, don’t understand the fuss about him, he hasn’t shown that he wants it enough.
For me it’s silly from him not wanting to play RB, he’s not good enough to hold the midfield or creating further up the pitch, and he is giving away his best chance for first team football.

What’s he done wrong lately? Been very impressive since Arteta came in. The inverted right-back role really plays to his strengths.

AMN could be as useful as James Milner

I am really enjoying hearing our Manager talking such sense communicating in this clear, direct and compelling way. I’m very aware that performance and results need to improve but I find Mikel a hugely impressive individual and am increasingly convinced that we have a very good coach for our team. Not many premier league clubs are in that position.

“With more time I would like to have specialists for every position to do exactly what we want to do.”

this statement alone is noble laurel winner for me

Where Is Ceballos?…Left Back At The Train Station?

I wouldn’t rule out Saka becoming the best left back to have ever walked the planet?

Well said,if the academy players show the passion and fight,play them and let the others know that they can be replaced.thisvseson is a write off anyway so give a chance to some of the gems from the academy,they are showing it that they can be proud of wearing the badge on their chest and fight for the club.
Well done guys so proud of Sakn,MartinelI,Niles,etc,etc

Blogs why are you getting so stuck in on the narrative that Soares is a bad signing just because we have AMN?

unless the plan is to use AMN in midfield, the signing of a rb was a bit of a waste.

Martinelli, quite rightly, has been getting all the plaudits. He’s been a revelation. However, Saka deserves a lot of credit too. He’s been excellent, particularly at left back. For me, I wouldn’t be dropping him right now even if Tierney or Kolasinac were both fully fit.

My FPL team are relying on what you say. 🙂

His attitude is so refreshing. This guy is going to be a great coach.

If Ozil Starts the match it means we are starting the crucial game with a Man down. Minus 1.

TBH I feel a strong urge to thumb up. But I’ll let it pass. Let’s be hopeful.

We needed experience in midfield today and more wing play. Guendouzi as mentioned a decent upcoming player but sometimes you just need that guile. Did not think Torreira added terribly much either coming on. As mentioned before, we have rued yet again a chance to add a quality and needed addition in midfield in Emre Can. He would have been better able to hold on his own and allow us to deploy two Mezallas forward thereby exploit the wings more. We have not thought straight in market for a while now and it had haunted both Wenger and Emery. Arteta… Read more »