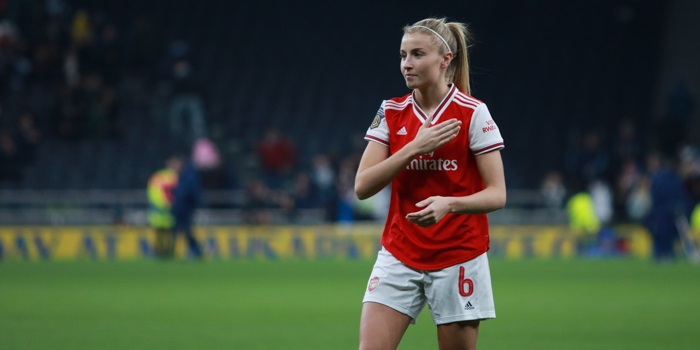 Arsenal defender Leah Williamson has been voted the Arsenal Women Supporters’ Club Player of the Season for 2019-20. The Arsenal academy graduate has been a mainstay of the team, operating mainly at centre-half but also playing in midfield this season.

Leah won the poll by a single vote ahead of Vivianne Miedema in second place. Leah’s performances have again caught the eye and she has forced her way into Phil Neville’s Lionesses starting line-up after another impressive campaign. Arseblog News spoke to Leah in depth about her performances this season at the end of March.

Cast my vote for @ArsenalWomenSC player of the season and opted for Leah Williamson. Some selected statsbomb data for her season follows…..[data is WSL only]

Unsurprisingly, Kim Little’s goal against Reading won the goal of the season poll, the 11-1 victory over Bristol City, which saw Vivianne Miedema score 6 and set up 4 was voted game of the season, while Danielle van de Donk’s last minute winner away at Manchester United in September was crowned ‘moment of the season.’

Third is our Goal of the Season!

After the cancellation of the WSL season was announced last week, with the final table decided on Friday, the FA confirmed that they intend to start 2020-21 on September 5/6. The final rounds of the Women’s FA Cup, which is currently at the quarter-final stage, could be played in August.

I’ll consider this to be good news as there has not been much of it around lately. Well done Leah!

She deserves it purely for her reaction to scoring her equaliser in the Conti Cup final.
That is a player that lives for Arsenal. Ten more of those and we’d be unbeatable!

She’s unique in that she is genuinely the only 🎶”One of our own”🎶.
Well earned Leah.