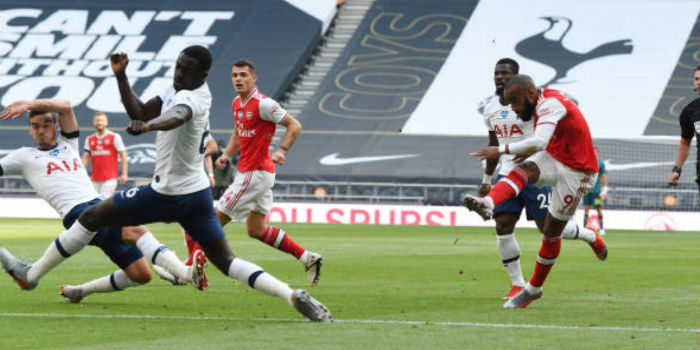 A couple of weeks ago, Mikel Arteta confirmed he’d look to have a conversation with Alex Lacazette about his future.

That chat looks set to take place when the season ends and it seems pretty clear that the boss, if he gets his way, will retain the services of the Frenchman.

Under contract until 2022, the striker has been pinpointed in some quarters as a possible candidate to sell this summer in order to raise funds for a squad rebuild. Atletico Madrid, Inter Milan and Juventus have both been touted as suitors.

Facing the media ahead of Saturday’s FA Cup semi-final clash with Manchester City, the boss was asked about the 29-year-old’s situation.

“I really like Alex,” he said. “I said that even before I joined here he’s the type of striker that I really like.

“He had periods where he was really unlucky, he was having the chances and not converting, which he was not used to.

“The way he can link play…he’s a massive competitor, he hates to lose, he goes for every ball, you see in every challenge how he is ready to go, how hard he works and he’s a very intelligent player. I am really happy with him.

As if to emphasise his point, he asked rhetorically: “Why would I want to lose a player like him? I’m really happy with him.”

This morning, Lacazette revealed that contract talk can be annoying, which is why he’s stopped asking Pierre-Emerick Aubameyang about his own situation.

Once the season is over and we know if we have Europa League football or not, things may become a little clearer on both fronts.

Hopefully he stays, I always been a big fan of Laca. Both at Lyon and Arsenal. He gives everything for the team, I know strikers are supposed to score every game, but he brings so much more to team that goes unnoticed.

Our attacking lineup looks really good, get Gabi fit again and we have all of our attackers back. Let Auba and Laca stay a couple of seasons longer so they can continue teaching and learning our future strikers!

I’m so glad Arteta has come in and really challenged everyone at the club..
The future is bright!

The issue with Laca in the current Arsenal squad is that he is being asked to do a lot of dirty work that you correctly point out isn’t getting him the same level of praise as goals would. He only gets one or two good chances to score per match, and he’s not at the tippy top level where he will bag every single one. I think this is a symptom of the issue that our team lacks so much creativity and goal threat beyond Auba. If we had a properly functioning spine of the team where the defense is… Read more »

Good point. If our defence didn’t need one extra player to function and we had a decent 3 man midfield, that would free him up to become a striker again.

Please name one example a striker from the (current) top 6 that doesn’t defend. Maybe Aguero but still his attacking contribution is out of Laca s league. Bottom line. Defending and scoring is a must if we are to penetrate our ceiling.

Once a gunner
Reply to  Scott P

Kean do the same thing Laca does and still scores more than him the problem with him is he does not been in a position to score when the crosses are in thats what Eddy know how to do more than him.

His performances range between great and disheartening, the sad dichotomy of laca. I just wish he would score more. I love his attitude though. Just score more goals

I think a lot of us are getting in to the mind set that we should be trying to sell any player with any kind of value who isn’t red hot in terms of their form (I’m as guilty of this as anyone, been going round saying we should sell Leno the last few days). I think what we have to try to remember is that in certain positions its incredibly difficult and costly to upgrade on what we have, and that number 9 position is definitely one. With Lacazette’s contract situation and a tough season form wise, I can… Read more »

I fully agree with your comments. Of late I’ve been having the mind set looking at players regarding who we could sell to bring in big money, but there is no guarantees you get a better player than Lacazette with the money we’d get for him. Like a lot of comments I love Lacazette commitment to the team. I firmly believe that Arteta trusts him and will be able to get more from him next season.

I completely agree with you, How many strikers have we gone through since Eduardo that all failed to impress. Giroud being the the best we had until Laca came.

giroud was probably better than lacazette. similar goal return and much better all round game,

I disagree, Giroud had prime Ozil, Santi, Alexis and Ramsey supporting him in every way possible and he still managed to fluff his lines in front of goal every single time. Ozil’s 15-16 assist record is proof of that. In contrast, Laca is playing with Xhaka and an Ozil whose head is currently far away from here.
Even discounting that, Laca has come in clutch in way more of the ‘big’ matches than Giroud had, except for a massive contribution in the 16-17 FA cup final and in second leg dead rubbers against Bayern

I really cannot see that at all. Lacazette is technically far superior to Giroud

Giroud is not better all round. Giroud has much better goals return. End of.

Looking at our position and striking options, losing Laca would be detrimental for Arsenal. We have Auba (played mostly on the left wing by Arteta), Laca, Nketiah, and Martinelli (still injured until end of year). Lose one and I think we’re running thin on the frontline. And we don’t have the position nor money to recruit top class striker either.

Hate to lose him at any cost. He is our Firmino/Suarez until Gabi can be ready.
We gotta make our youngsters learn from these model pros if we are ever to get back to challenging.

Honestly speaking, I don’t see Arsenal ever being a CL side as far as Lacazette is a part of our team. He is the literal personification of how Arsenal is now. Weak, easy pushovers and inconsistent

You need to see an eye specialist… get help

Matthew, get back over to those Spurs sites son.

Mate how is Laca weak or a pushover? I can understand some frustration with the fact that at times his conversion isn’t the best.. But look at the goal he scored against the scum and the performance against Liverpool. How do you call that weak?

it depends on the type of play we go for. we’ll need a laca battler type player if we flank him with 2 inside forwards (like 2 pepes). if we play with 1 inside forward and 1 creative player, then we need a poachy goal-hungry stay in box player.
2 inside forwards = need drop deep/traquista/deep-lyingforwards like laca/ martinelli
1 inside forward + 1 creator = poacher like eddie/auba

Sorry but I am not fully convinced by one Pépé yet but you want two.

christ 2 pepes. the one we have is bad enough. How about we just get a striker capable of scoring more than 14/15 goals a season.

people forget he was our player of the season just last season… this one was a rough one for him, so what? we expect aubameyang to stick with us despite us having a horrible season but we aren’t willing to stick with laca because he had a bad one? he’s a very good player and has got more class than most of our fans.

This is a very good point. Player of the season last year and because of one bad year, get rid of him? While at the same time craving for a player, who is beyond the level of our current crop, to spend the remaining years of his career, which he could top off with CL glory, fighting for us mid table. Why should we expect loyalty and rebuild respect for the name of Arsenal when we don’t give it? One reason Laca doesn’t get enough goals is the mid field is not creating enough chances and this is because the… Read more »

doesnt get enough goals cos he isnt top level. hes a mid table prem striker nothing more. but hey thats what we are now a mid table team

It is quite simple and what was promised a while back. Players that don’t sign an extension have to be sold. If he is committed and not running down his agreement for a free, I like Lacazette.

The current system and a bit of luck is what stops his goal count.

I think Laca has a contract until June 2022, so the “sign extension or be sold” thingy is not yet a big topic.

Starting to feel more and more like Auba’ s signing or exit will be the initiating factor of most of our other deals. Though I really like Laca, to the extent I think he should be our captain, I don’t think we can keep both Laca and Auba with the deficiencies we have in midfield and the other young offensive threats that are vying to move into starting positions.

I agree. Albeit I would think like Wenger and Unai before it will be no different in that any gaffer will likely say he wants to keep everyone otherwise he will affect price of player in market. That said, much rather keep Laca than Auba even if latter reaped more goals. 1) Auba is 31yrs and unlikely to stay given a good offer from an actual CL team. Its his last hurrah to win things and also benefit from a big move. 2) Laca retians the ball better where Auba for all his goal scoring heroics overall tends to handicap… Read more »