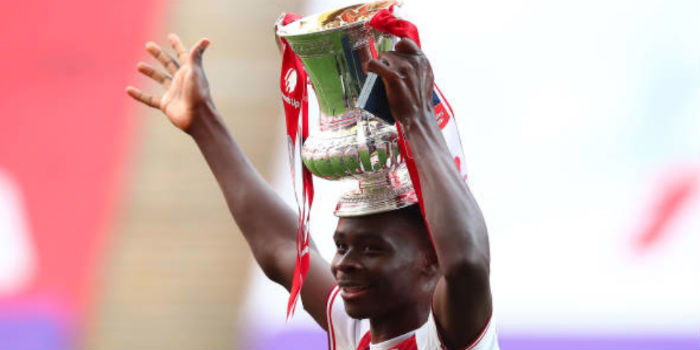 Bukayo Saka’s rise to prominence continues with news that he’s made the 20-man shortlist for the 2020 Golden Boy award.

Run by the Italian publication Tuttosport, the award, selected by European football journalists, recognises the best footballer under the age of 21 playing in Europe.

Gabriel Martinelli, William Saliba and Trae Coyle did well to make the 100-man shortlist but have since fallen by the wayside.

When you look at who is left, it’s easy to see why; Saka, who earned his first senior cap for England last week, faces serious competition for the gong.

This time last year, Matteo Guendouzi reached the same stage. To date, the only Gunner to win the prize is Cesc Fabregas; he did so in 2006.

Arteta on a poor first half, Saka and Leno’s saves

Saka: We’ve given ourselves a chance

Erling for sure.Congrats to Saka.

Between Haaland and Sancho?

However, Saka probably the only one to make that list without nailing down a place – LB, LWB, LW even AM?

I’d throw in Davies as well. Tom Davies of course.

Reckon alfonso Davis is a fair shout. Arguably top 5 full back in the world and champs league winner at 19!!!! Kid oozes talent. That would be my top 3 though. Tough pick between them.

And he’s a fellow Canadian. Just a great lad. Bayern scout so well.

Kind of cool to see two Canadians on the list, Phonzie and Jonathan David. For the award, I’d have to say it’s between Phonzie and Haaland (much as I’d like to see Saka win it, of course).

Fun fact – my daughter used to work for the Whitecaps on game-day merchandise sales, and she met Phonzie a few times. Says he’s a really nice guy, very down-to-earth and humble. Easy to talk to. It’s great that Canada has someone like him representing us.

Sancho has been playing for ages. For me, Camavinga, Ansu Fati and Saka.

Blogs is playing with us

Saka, young boy with the football brain of an adult.

As much as I want Saka to win. But I would vote for Alphonso Davies. The way he left Chelsea defence in is dust is too awesome.

Don’t forget about Nelson Samedo in the CL semi thrashing of Barca!

I’m Canadian and still in total disbelief to have two of our players in the top 20 (Jonathan David the other). Quite the progress towards fielding a respectable team at the 2026 World Cup

So so proud of this boy. Hope he keeps his head down and continues to work hard, sky is the limit for him

What are you doing?
Reply to  Wayne

And you play badminton

Am I the only one who thinks the whole “golden boy” thing sounds a bit weird and creepy?

Sorry for my previous comment, i tried to copy paste a picture screenshot.

I as saying Callum Hudson odoi is still at Chelshit right????

I had to check that too!

Still got another year to win it.

If not saka, got to be Davies at Bayern , amazing player

congrats to Saka! i’m hoping for a big improvement under Arteta. Phonzie gets my vote. he did it consistently against the top clubs at the highest level.

I think Haaland will win it, he’s probably the most popular player on that list. Though I wouldn’t mind being surprised.

Robert H
Reply to  Salibaba and the Forty Thieves

I’d be shocked if Davies didn’t win. One of the best players in the CL winning squad.