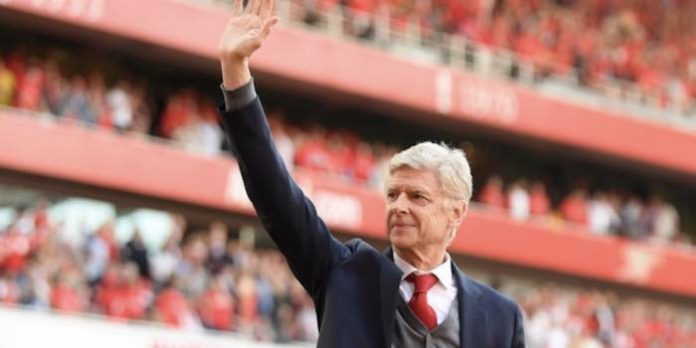 In the week Arsene Wenger’s much-anticipated autobiography “My Life In Red & White” is released in the UK, it has been confirmed that the Frenchman will be the subject of a documentary for release in 2022.

“Arsene Wenger: Invincible” has been commissioned by Canal Plus and will be directed by Gabriel Clarke – best known as ITV’s roving football reporter – and Christian Jeanpierre, a sports journalist familiar on French TV.

The film, which will be narrated by Wenger, will cover his career in France, Japan and England and feature interview contributions from key figures during his career, including our Invincibles side of 2003/04.

Variety reports that the documentary “will boast unseen archive and showcase original and intimate filming with Wenger, who has remained an enigmatic figure all these years.”

Speaking about his participation in the project, Wenger said: “This documentary highlights a very special period in my life and career. I have total confidence in the team and the production companies. Gabriel and Christian are probably the only directors who could persuade me to do this documentary! I will try to give the best of my memories and my life story!”

Grand. Ive got the french version of his book and 1) so far it’s excellent and 2) a great story to adapt to film.

Asked to comment on the doc, Wenger simply replied “I did not see it”.

I laughed too. You’re not alone in your loneliness.

I’m also feeling very starved of football. Yesterday I was taking my kid to the park and there was this under 9’s footie game going on so I stood and watched for about half an hour and cheered on the reds. I even decided that one player was Auba and commentated for him under my breath when he got the ball.

I got home and realised I’d watched most of the under 9 game instead of watching Belgium England and thought that sounded about right.

I hope he takes the hand brake off for this documentary!

Congrats. What a great story he has to tell and pleased that it will be told finally.

Football’s answer to David Brent has returned. Wish he had stayed out of the public eye. His pretentious rambling is so embarrassing.

Boxing Kangaroo to you
Reply to  Ex-Priest Tobin

Wenger was probably the most inspiring, intelligent, and thoughtful manager in football. Don’t let your sour grapes about whatever it is you are sour about soil the truth.

Who took the jam out of your donut

A P
Reply to  Ex-Priest Tobin

Not half as an embarrassment as you.

The sentiment in these comments applies well to some posters on this site.

David Brent is also one of the great entertainers of our time, point well made.

Wow, you really poked the bear there Tobin, lol. Without the vitriol I do kind of agree though. I would have loved this if he retired and released it 10 years ago. Now I’m less enthused. Wenger is no longer in my eyes the Messiah figure he was in my youth. I hope any film holds him to some critical account rather than just being another fluff piece. It used to rile me when Adrian Clarke would take digs at Wenger but his recent comment about his book promo tour being the ” it wasn’t my fault tour” struck a… Read more »

Come on! The only reason you hate Arsene Wenger and think he’s always rambling, is that you’re too thick to understand his ideas and wisdom. You’re more suited to someone like Harry Redknapp, who constantly butchers the English language – you probably relate to him better.

What else about him do you find ‘embarrassing’…?

I’m surprised none of Netflix, Amazon, HBO etc have picked up the rights to release a documentary around The Invincibles, given all the great recent documentaries released around sporting feats

Tottenham Hotspur: All or Nothing.

Tottenham Hotspur: All *FOR Nothing

Hoping he can match Bendtner for his honesty.

Hopefully it doesn’t sugarcoat over events like a certain Amazon sports “documentary”. Hopefully we’ll be reminded again when its closer to its release date.

I’ve not watched it, but I have seen Tiger King, which I imagine to be similar.

Cannot wait for this.

I hope he sings like a fucking canary, especially regarding the treatment of David Dein and the penny pinching Kroenke, who he (Wenger) took the rap for so long from the ‘Wenger Out’ cunts.

Won’t happen, the man has too much class.

I think you may well be right, my friend.

Where was all this resistance against these “‘Wenger Out’ cunts” at the time, that I see now?! I really wanted to get “AKBs” together to perform counter protests against all the banner waving, and that stupid march from Highbury to the Emirates (what a long march that was). I feel so guilty for not doing more to fight them. Two of the main reasons for the lack of league titles in his latter years were cheating referees and our toxic fans. Imagine what he would have achieved if he were managing us today with VAR and no fans in stadiums.… Read more »

I’ve always backed Wenger – and stood up for him at the Emirates the same way as I stand up for Ozil on this page.

Gabriel Clarke directed an amazing documentary on Bobby Robson so this should be in safe hands.

Kami
Reply to  J to the C

Arsène Wenger deserves not less than the cream of the crop.

Well said. The most successful manager this club has had and in terms of greatness up there with Herbert Chapman.

Petit's Handbag
Reply to  J to the C

Did not know that was directed by Gabriel Clarke, myself and my girlfriend (not a football fan) watched that together and she cried her eyes out.
Feel like that will be me this time.

J to the C
Reply to  Petit's Handbag

I found it emotional at the end, and I’m Scottish (but don’t tell anyone!)

A is for Arsenal
Reply to  J to the C

Nothing shameful in being Scottish

I wonder if we’ll find out the full story behind the £40m +£1 bid for Suarez ?
Looking forward to reading the book tomorrow and to seeing Dan Walker interview Arséne this evening

That bid had nothing to with Wenger and was down to that idiot Gazidis. Wenger was apparently livid when he found out about it.

It would be interesting. I wonder if we’ll also get the story behind the panic transfer of that player to Utd in exchange for someone we didn’t really want because (not for the first or last time) a contract had been allowed to run down? I hope so because that decision cost the club at least £40 million (then) in a transfer fee for Sanchez. And, following on from that debacle, the crazy decision to award a structure-busting wage deal to Ozil – the consequences of which we’re still living with now – because we couldn’t be seen to lose… Read more »

*of Sanchez to Utd…

That would not make for a great book really would it?

When I think of Sanchez and Ozil, I think of great football matches, brilliant passing, brilliant goals and those wonderful FA Cup Final victories that they took part in, respectively.

Simp for Arteta
Reply to  DublinGooner

Could someone please explain why that bid was wrong if we thought he had a 40m release clause?

Luther
Reply to  Simp for Arteta

It will be interesting no doubt, but there almost certainly won’t be any critical analysis so basically a “love in” for Mr W.

Which will make a nice change to all the usual bollocks being said and written about him.

Hard to imagine someone agreeing to a documentary about themselves which also just takes the piss out of them when they’re one of the great managers of our time.

Yeah there’s bound to be a love-in for, not only the greatest manager, but the greatest legend in our club’s history.

I’ll only watch a little bit

Just a little bit the Gooner, then. ?

Look errr… you’ve got to have the mental strength to watch it through, to watch it without any handbrakes on!

I’d rather watch this man watching the rerun of a French div2 match than watch an intl friendly or a nations league game for that matter.
I wouldn’t be watching the French div2 game , on in the background, I would be gazing, I say gazing at Arsene .

Favourite Wenger moment:
Hack: what do you think of Mourinho’s comments calling you a voyeur?
AW: honestly? I am embarrassed for him
Simply perfect and delivered without a hint of emotion.

Boxing Kangaroo to you

^Here’s hoping (not Hear’s). Sorry to be that guy.

The hand break is officially off!

His interview with Nesta McGregor on the BBC is such a joy to read.

Yes, Wenger is not without faults, but by god he talks with such wisdom and depth that is just impossible to find in Managers nowadays.

My favourite line from the article is him saying “I’m a little bit like a guy who’s ended a relationship and has no contact with his children any more but he still loves them.”

When you’re born, your first instinct is to survive. Then you must find the meaning of your life. My life is football
Arsene Wenger