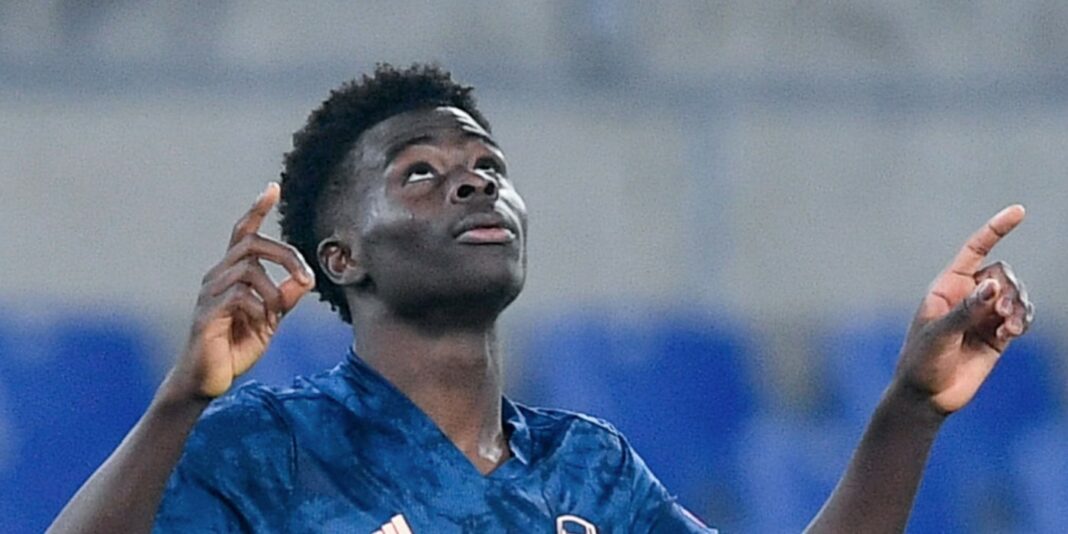 Arsenal have revealed that Bukayo Saka will be available for selection for tomorrow’s visit to West Ham.

The 19 year old was taken off at half-time in the North London derby win, and didn’t feature in the midweek defeat to Olympiacos because of a hamstring issue.

However, with the Interlull looming, the club provided an update on the winger this evening, saying, “As a precaution, Bukayo was left out of squad to play Olympiacos on Thursday.

“During this week, Bukayo has responded well to treatment, has participated in training and is now available for selection.”

It remains to be seen if he’ll be used from the start against the Hammers, or whether Mikel Arteta will play it safe and have him as an option from the bench.

The only other fitness issue involves Willian, who has a calf strain and will be assessed before the squad is finalised tomorrow.

Every time I see his age I’m sure it must be a typo.

Calf strain on Willian.
You know calves are tricky muscles and sometimes heal very slow. We should show every bit of caution as possible (permissible) and allow it a good 10 weeks of rest. I know the pain and I have real concern for Willian’s well being and fitness, nothing else.

Hope it heals completely by May-27. We will need him for the crucial run-in beyond that, if any.

Yeah bro!
I appreciate your awareness reg Willian! Personally I would also give him a decent amount of time to recover, calf is a nasty thing as we all know, especially at his age.
On the other hand Martinelli’s time has come!

he still need to fight with esr

Bring him on from the bench at 60 minutes if needed.

Well, I am glad Saka is back because he, Smith-Rowe and Odeegard?🤔 when on together will terrorise any team, now Willian? was one of his critics the past few months, but credit to him, he has turned himself around and beginning to look the exciting player we all thought we signed, so we need him back asap, playing to maintain his rediscovered form, so hopefully we will soon have him back too competing for places

So Granite Hard is the namesake on Arseblog comments that Willian uses.
Hey Will, you know we love you. Take rest, those calves deserve it.

He barely warmed them up :]

B jack
Reply to  Granit(e) hard!

Looking at the amount of dislike just shows how stupid most of our fans are..

Fans have a right 2 their own opinions. U don’t have 2 call us/then stupid

Mate, the real stupid person is someone that thinks anybody else that holds an opinion different to his is stupid….shows how intelligent you are pal🙂

I don’t think many people thought we’d signed “ an exciting player” in Willian. And I think a fairer assessment is that he’s less shit than he’s been as opposed to rediscovered his form..
I can only assume by your comment that you’re trolling..

Wow, I really hope Willian is fit.
Such a joy to watch as against the likes of Startinelli, who is so static and uninspiring

Sarcasm is fun, but its your opinion, just like mine is mine, my right as an Arsenal fan, you might not like it, but its a democracy and all good as long as I or you treat each other’s opinion with respect…all good

So, you’re actually being serious.
It’s all good

good luck man, I support you…

What blows me away about William is how he’s gone from God awful to not losing the ball that often and getting the odd pass right. At this rate we might get him to play well in his last 6 months for us. If old age doesn’t put a stop to that of course. Worth every penny for the remaining 2.5 years we have him.

We really must invest in more long term contracts for old has beens out there. Is Fellaini still playing?

Willian at first is considered as an instant impact for our team because we dont have any wide creative player on the left (Pepe works on the left if he is paired with Cedric), Arteta didnt know we have a gem in ESR. All in all, at least we have more depth now for that position.

Willian’s cunning plan of sleepwalking the opponents to defeat is yet to pay off but there’s time. Two and a half years left to perfect the tactic to be more precise.

The Beast
Reply to  kyoukaiten

Yeah, I don’t see anything wrong with using Willian as a squad player, which he’s pretty much been used as for most of the season.

Would’ve liked to see more Martinelli this season but happy to wait til he’s considered ready and fits in/around the starting 11. Given the temperament of some of our support, I’m just glad we avoided a scenario where we had to put too much responsibility on his shoulders and he maybe didn’t perform as expected, leading to the typical over the top scapegoating.

I’m just hoping that we take Saka off in the 89th minute as a precaution which then takes him out of England squad for interlull.

On the other hand, it seemed to be his England call-up that boosted his confidence earlier in the season and he realised just what he could do.

If we can beat West Ham, finishing in a Europa place is on. ESR, Saka, Partey and Odegard on from the start. We’ll crush them. Shame Tierney played again on Thursday as he looked knackered.

Win tomorrow, and Villa draw with Spurs would open things up. It would probably mean nothing if we don’t beat Liverpool in 2 weeks time

Leno, Soares, Luiz, Gabriel, Tierney, Thomas, Xhaka, Ødegaard, ESR, Pepe, and Auba would do for me.
Saka on the bench.

I would like to see Pepe in front of Cedric. They seem to have a relationship. I Dono about aubu, every game is such high stakes I don’t know if we can afford 2 missed glorious chances. However if he can get his scoring form from last year we could finish strong 🤷‍♂️

What was interesting about our last game is that Willian was not there to blame. Each game one player is put under sword, but our problems don’t come from a single player. Our mentality at the club is extremely weak. It has been weak for many years, even near the end of the Wenger era. People don’t like to admit it, but we haven’t had a proper capitan for ages. Our players are too soft and too nice. We need to fill our squad with the mentality of players like Tierney and Saka. We need players who fill fit for… Read more »

Looking forward to this game.

Games v westham always have their own dramas. Santi and Podolski always loved a goal v the hammers.
Podoli had a few great hammer strikes v them.

Luiz needs a rest, the traditionalist in me says Gabi and Mari can’t be played together as two lefties but be interesting to see someday.
Rob and Mari I’d go for with Ceds at Rb
Thomas to have a stormer CM alongside Ever-present Granit.
ESR Marti ODD and Gabi Marti
With Laca or Auba up top is very exciting

It’s funny how two right footers are not usually thought of as not being able to play together in defence, but left footers are.

It’s not “funny”, it’s just a natural consequence of the majority of the population being right footed. It’s much more common for young right footed cbs to be forced to learn playing on the left due to greater competition. Whereas left footed cbs rarely need to play on the right, so it’s only fair to say it’s a greater risk playing them where they’re not used to.

Well put, didn’t think of it this way

Can’t understand why take the risk to try to play Sara, instead of giving him breather and recover
We have Martinelli waiting on the wings waiting to be played