The new position has been filled by Dutchman Kevin Balvers who joins from Malmo after five months in Sweden.

His LinkedIn profile also details a freelance stint with Barcelona and roles as Head of Performance at Vitesse Arnhem and as Performance Analyst of the Curacao national team. 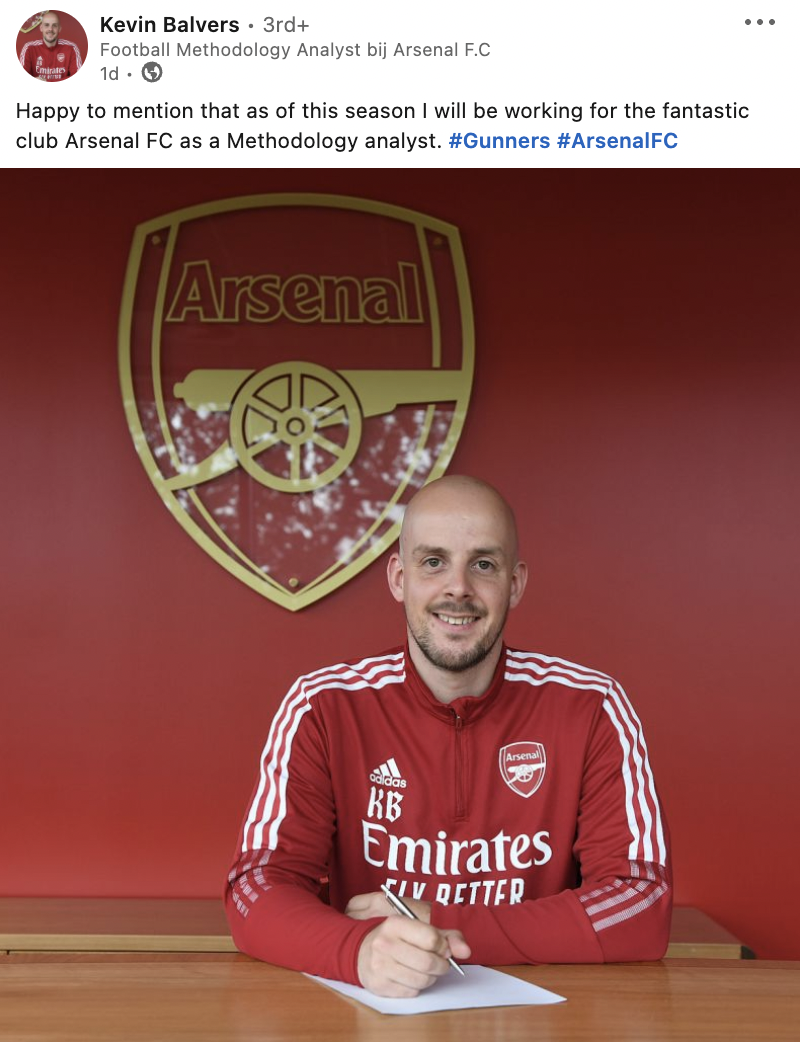 TGG say Balvers will “will help with first-team analysis as well as identifying best practice and trends (in terms of tactical, technical, performance and recruitment) at both Arsenal and other clubs, both at home and abroad.”

The Gunners used to include a page on the club website that detailed the various backroom positions but they did away with it a couple of seasons back. In lieu of that, it’s worth visiting TGG who have a page of their own; there are some interesting roles listed in the expanding team. See here.

Well if he’s good enough for the Curacao national team…

His “Freelance position at Barcelona” sounds like when I put “Keen philanthropist” on my CV when the people at the sky dive centre told me it would be cheaper if I did it for charity.

Wow, it sounds like he’s gonna have a lot of work on his hands.

Our recruitment, performance and tactics have not exactly followed best practices.

There’s always one guy at work that no one has a flying fuck what he does.

With his success rate did he need them?

We seem to be building something. There seems to be the semblance of a plan. It will take a few years but I feel like something is brewing

Other than Arsenal, I think basically all of Kroenke’s major teams are doing pretty with similar plans. Avalanche just won the president’s trophy with a young exciting team, Rams have done much better since Kroenke’s takeover and were recently in the super bowl, nuggets just finished in the final four. I think Arsenal has struggled more because US sports operate differently teams like the Leafs, Rangers, have a salary cap and can’t just buy players you have to trade your own players/prospects/draft picks where as City/Chelsea/United etc. can just throw money at a problem till it gets fixed.

Can he play right-back?

No, but he could be the backup goalkeeper to Leno.

Is he signing a blank sheet of paper?

Here is to him finding a method to our madness!

Hope he will analyze whether any recent Brazilian signings from Chelsea are too high up the selection pecking order.

If the ship is sinking do you need an analysis report on it?
Money that could be better spent on an attacking midfielder for example…

I’ve looked at the TGG website. My conclusion is that I want MIGUEL MOLINA’s job. He is an expert at integrating the physical and mental elements of the game into training sessions.