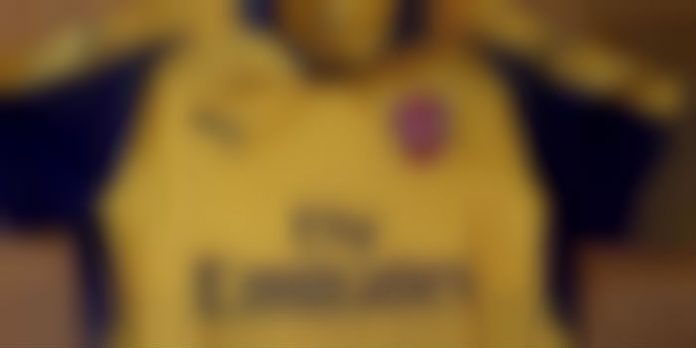 Back in May, Footy Headlines shared pictures of what they claimed to be Arsenal’s new Puma away kit for the 2016/17 season.

It showed a yellow body with what appeared to be a grey trim; a throwback to the colour-scheme worn during the run to the 2006 Champions League final.

It didn’t look too offensive, but we did wonder why we’d abandoned the classic navy blue.

Well, it appears the secondary colour is navy for both the trim and shorts after all. Here’s Footy Headlines latest leak…

So instead of echoing the kit worn in the disappointment of 2006, it now, collar and cuffs aside, closely resembles the shirt we wore in the Uefa Cup final defeat to Galatasaray in the 1999/2000 season.

It looks as though the away kit has gone on sale at Puma’s official store in Chile. It’s a navy trim, albeit a very dark navy.

If they bring back the gold kit, I will officially become a full kit wanker

I prefer the charcoal-ish. My 2006 Rosicky jersey has always been my favourite. Since he’s now left, I guess the blue will do. Still sad.

God this away kit is ugly, I agree with you, the 05/06 was beautiful, very Roma-esque

Nevermind i got confused, but i think yellow looks tacky, unless its BVB’s killa bee kit

Definitely looks a lot better with the blue!

Great kit, if it turns out to be. Brings back the classic us. Now let’s win the league! Here I go with my optimistic views before the season again. You should have seen me at the end of last season. Oh well

A penitent’s hair shirt would be better than last year’s beige sweat stain. But this new one is a fantastic shirt on its own merits. Well done, Puma.

name the players in the picture? overmars, suker?, petite – luzney?? and john lukic in the training tops, kanu, silviniho over his right shoulder, dixon over his left shoulder?? and grimaldi at the back, sorry about the spelling, just leaving work!

Its Freddie not Dixon, apart from that spot on!

Overmars is holding himself as if he’s just become completely mentally unhinged.

For some reason Ive always hated collars on jerseys. This didnt help, but other than the collar it looks very good.

Any one the official release date? I really like both and fancy treating myself

It’s my understanding that they’re calling the color “ebony,” and that it is in fact gray, not navy. Don’t get your hopes up for navy blue. Not sure if the photo at the top of the article is altered or a knock-off, but the navy rumors don’t jive.

It is on sale in Oslo, Norway and it is yellow and grey.

Favorite away kit? The 2007-08 White-Maroon kit was brilliant imo. Would love to seem something similar in the near future for us.

Agreed – that kit was classy as fuck. Would have loved for that colour scheme to have become permanent.

Have we signed a striker yet?

Scott from London, Ontario, Canada
Reply to  Kosc' other Pocket

Sometimes a non-sequitur just makes me laugh. Not sure why, they just do, so thanks for this one!

For me, the grey represented my beginnings as an Arsenal fan, playing FIFA 07 on PSP in the yellow and grey with a wild haired Rosicky bc the graphics were shite. I was thinking about putting Rosicky on the back of a long sleeve. Damn, Puma

Call me old-fashioned, but my favourite kits are still the classic one with the plain red body and plain white sleeves at home, and the plain yellow body with plain blue sleeves for away.

That said, this season’s kits don’t look too bad, and I’ll probably end up getting a Sanchez away jersey for my collection.

You seem quite the opposite based on your name

The secondary colour in those ArsenalChile tweets photos looks very much like grey as opposed to navy. I’d take Footyheadlines ‘leaks’ with a pinch of salt, the site has a habit of showing fakes or prototype variations, only to delete pictures and posts if they don’t resemble the final product when launched.

Years ago you weren’t allowed on the pitched without your jersey tucked. Times have changed.

I didn’t like any Puma kit we had.. just dont like the way they design jerseys, they make it look too complicated. Always liked Nike more with their simple design. #BringBackNike

Won’t have to worry about armpit stains.

Well, at least we no longer have to look back to the 1995 kaleidoscopic banana away kit or the velvet bumblebee third kit from 2010 and hang our heads in shame at having worn the worst kits in the history of world football. Norwich’s third kit for this year has finally surpassed those abominations.

This has to be seen to be believed.