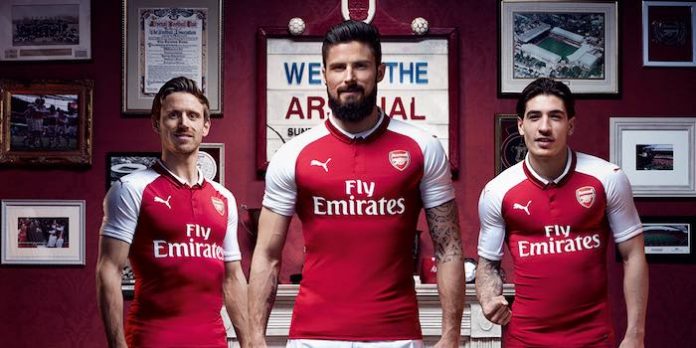 Amazingly the home shirt is red with white sleeves. There are also shorts designed specifically with holes through which players can put their legs and cover their bums, and some socks for their feet.

Once more the kit was manufactured by Puma, who really wanted to get in on the concept of ‘The Arsenal’.

That’s understandable, Arsenal are unique in that they’re only club to have ‘The’ in front of their name, even if it is colloquial. However, their attempts to harness this have, it’s fair to say, fallen a bit flat.

No jokes, no Arseblog News messing around, this is what was in their press release:

Erm, what?! Petr Cech’s helmet? Uncle Arsene? If this is what made the cut, imagine what the creatives sitting around the creatives table didn’t think was good enough. You’d shudder to think.

Anyway, we’ve got a few of our own we feel represent this great club of ours a bit better.

Feel free to add your own in the comments below.

I am THE guy who’s going to buy a Rambo8 shirt after finding out he dropped some Irrelevant Dutch bloke with one punch.

Me too! I always thought it was Theo who did that. Not sure why..

Hahaha Theo having a go at Van Persie… I would pay to see how hilariously awkward that would be… and then jump in to help him out.

I’ll second that … never heard this story before!

Reading shit like this makes me thank Dennis for the fact I no longer work for a marketing agency. What nonsense.

As we all know, 50% of all marketing spend is wasted. It’s just that nobody can work out which 50%.

Catering to the angry 50 year olds with the THE nonsense.

We are THE ones that have too much time to waste at work.

We are THE masters of embarrassing PR waffle

We are THE Martin Keown who jumped all over van Nistelrooy

We are the ones who (since 23:10 yesterday) have never smoked a cigarette

why though? Are you fasting as well? Can’t wait to smoke after a long days fast

We are THE former club of Igors Stepanovs

We are THE standing on the North Bank hoping we can go the whole match without needing a piss.

and more importantly hoping the chap behind us doesn’t need a piss either.

We are THE producers of Bendtner and Sanogo

Much, much better, Blogs. A career around a creatives table must surely beckon.

Bellerin’s tummy is not flat, he is a bit fat 😀

Wait, Ramsey punched RVP? How the fuck have I never heard that story?!

We are THE hands that shoved Jose off his heels

We are the 7th Goal at Reading.

We are the cameraman that missed Cesc’s Goal straight from the restart against Spuds.

We are Andrei Arshavins Goal celebrations.

We are that Kieran Gibbs deflection that lost against a poor Utd.

We are THE only true fans of football

We are THE Abou Diaby kicking John Terry unconscious

We are THE cooks who chuckle when they make lasagna

We are “THE” Totnum haters…

We are THE psuedo heros that london deserves, and most definitely the heros they need now. we are… THE dark knights

I cringed myself, but I’m posting anyways

I like that you fully committed to your comment and sent it anyway 🙂
I am THE one that thumbed you up.

We are THE Szczezny that clotheslines Gareth Bale

We are THE lasagne that gets 4th place

Damn that actually brought a tear to my eye!

Oh sod off! You piss taking puss. Why get emotional about old shit

Been wanting to sound like an A-hole, BS troll. Hope I got it right

We are THE unfeasibly large penis that hit Nicolas Anelka in the face in the dressing room.

We are THE lion Keown as Van Nistelrooy pisses his boots.

Did they let the intern come up with this copy? The only other reason I can think of is that the writer of that guff was German and has a quirky sense of humour. “Ha, Old Uncle Arsene, zey will luf zis. Haha.”

THE Arsenal vs The Chelsea. What a game it’s going to be

We are THE FA Cup.

We are THE ones who call our neighbours shit even though their name is.. well they are shit. Didn’t think this through..

We are THE holders of the 4the place trophy… Oh wait, that sent to someone else this year lol

We are THE Grimandi tackle on Edgar Davids

What Did She Wear?

We are THE Diaby boot in John Terry’s face

Fireman Sam
Reply to  What Did She Wear?

We are THE zipper on that jacket.

Without wishing to upset the humour of the page, just a history note for newer fans: originally we were going to be called “The Arsenal” but Henry Norris decided that, by dropping The, we would be the first named of all League teams.

For this reason alone, I hate that clubs have gone bankrupt only to reappear as “AFC nobodies”. Shame on anyone who lists alphabetically using that prefix!

We are THE banners flying over the stadium twice per game.

We are THE World, we are THE people

fuck me, i can’t even get the lyrics right!

We are THE Invincibles

Does anyone know who the other people are in the poster? It’s driving me mad.

I canNOT stop THE laughing! ?

Puma guys totally lost it. They forgot the most simplest thing about us.
We are THE JEFF!

I really like Blogs’ “We are THE Atom and THE Humber”, though.