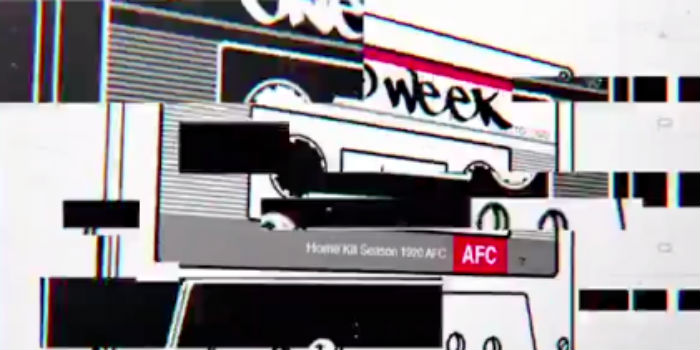 Arsenal have confirmed that our partnership with Adidas will launch next Monday with the new home kit available exclusively through the club and our German kit makers until 7th July.

In a teaser released on social media, the club has shared an animated image of a rotating cassette tape with the words ‘Arsenal Home Kit 19/20’ on it – something that speaks to the retro 80s/90s inspired look of the home kit.

Exclusively available from Arsenal and our kit partner until July 7 pic.twitter.com/B7tZXyOd3m

Since confirming the new sponsorship deal last October, the club, presumably because we’re under contract with Puma ? until Sunday – has kept quiet on any new details.

Leaks of the new shirt designs have been numerous since then, although only in the last month or so have we seen versions that look to be the real deal.

Ahead of next week’s launch in the UK, new gear has already been spotted on sale in the US.

More #arsenal kit on sale …seems the UK and the “launch” will be last to get the kit #afc #adidas welcome pic.twitter.com/sxdJUZRp4w

Puma always forgot to put the ‘r’s in their shirts.

Adidas – ‘Impossible is nothing’.
Arsenal – ‘Implausible in everything’.

Spoiler alert. It’ll be red and white and made of nylon.

You had to ruin it didn’t you

Yellow one is outrageous! Love it!

Thanks for the mention @acl_soccer

Genuinely tough choice if I’m only getting one. I remember choosing the home kit in 16/17 and they released the special FA Cup final embroidered one towards the end of the season and we ended up winning it FFS.

That Red one should be called The Adidas Viagra shirt as it`s so hot !

Wouldn’t it need to be blue?…

The away looks pretty damn good from what I can see and the home is nice too.

Stop trying to fleece the fans and invest some money in the squad so we can can compete, no use in having shiny new kits to lose in.

Rob Holding Back The Years
Reply to  Rico

…back from passing out on initial viewing… [passes out again]