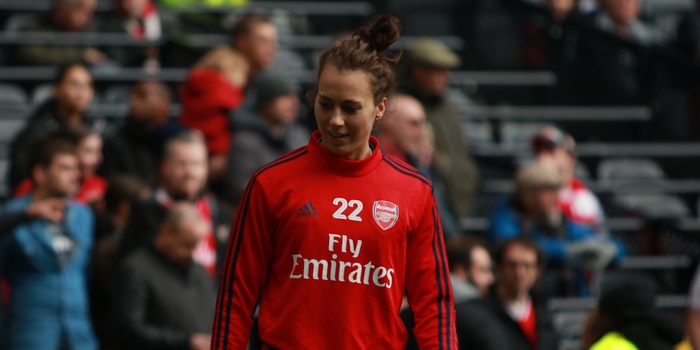 On Monday, Arsenal announced that Viki Schnaderbeck signed a new contract. The Austrian joined in the summer of 2018 but missed most of her first season after tearing knee ligaments in the last pre-season friendly of that summer. She returned for the end of the Gunners’ league title winning campaign but this season, Viki has become a much more integral member of the squad.

Prior to joining the club, she had played in defensive midfield and centre-half at Bayern Munich. With Lia Wälti and Leah Williamson unavailable for the Emirates Cup match against Bayern Munich in July, Joe Montemurro experimented with Viki in midfield. It was an experiment he hasn’t revisited with Schnaderbeck deployed most commonly as a rotation or back-up option for the first-choice central defensive partnership of Leah Williamson and Jen Beattie.

Nominally, Viki is much more alike to Leah and Louise Quinn, the other back-up option at centre-half, was to provide back up to Jen Beattie. Schnaderbeck’s opportunities were enhanced by the fact that Lia Wälti wasn’t fit to start the season, which meant Leah Williamson was required in midfield. Then in December, Jen Beattie injured her calf and missed eight weeks of the season. Montemurro more often opted for Schnaderbeck to fill the void than Quinn.

A dive into the data [courtesy of Statsbomb] demonstrates why Joe likes to play Viki as a defender. Her 90% passing success rate is bettered only by Jen Beattie [91%] in the Arsenal squad. Leah Williamson clocks in at 88% but she tends to try riskier passes and she has played some games in midfield. Schnaderbeck’s data broadly maps with Jen Beattie’s which makes sense, as the Austrian also plays on the left side of the centre-half pairing.

With the likes of Leah Williamson and Lisa Evans on the right, Arsenal demonstrate a heavy right-sided bias in their build-up play. Viki plays 4.20 long balls per 90, which is far fewer than Beattie (8.20) and Leah (10.28). Though she makes her passes slightly further higher up the field than the other two. Viki’s passes are played at an average of 39.10 metres from her goal line compared to, Leah (36.73) and Jen (36.41).

That said, Viki’s data is slightly skewed by her two WSL outings as a left-back. The coach fielded the Austrian at full-back for December’s 3-0 win over Reading with Katie McCabe dropped to the bench. It seemed an unusual move and when I quizzed Joe Montemurro about it post-match he explained that he was using her as a decoy for Reading’s high press.

“The idea was to overload on one side and have a more defensive full-back on the left so we could drag Reading to one side and find space that way. That’s exactly how the first goal came about, we opened up some space on the right which was great.” As a right footer, Schnaderbeck’s inclination is to drive in-field which helped to open up the pitch and veer towards the right as Joe wanted.

Playing Viki at full-back was a “rope-a-dope” tactic. Reading typically put a lot of pressure on Arsenal to stop them playing out from the back. He wanted them to see Viki as a potential weak spot and to gang up on her to leave space on the other side of the pitch. It worked and it says a lot about how highly Montemurro rates her technical quality to expose her in such a way and back her to handle it.

Her data is very comparable to Leah and Beats in other areas but with some subtle differences. She doesn’t pass the ball forwards as often as Williamson and Beattie do- 19% of her passes go forward compared to 27% of Leah’s and 25% of Jen’s. Her games as an inverted left-back will have affected some of this data. Danielle van de Donk often plays from the left of the Arsenal attack but strays in-field to operate as a 10, whereas the right-hand side of Arsenal’s attack boasts the permanent presence of Lisa Evans as a wide outlet. The left-sided centre-half has fewer forward passing options.

The role of Arsenal’s left-sided centre-half is to provide defensive and technical security with the ball, it is largely Leah Williamson’s job to handle the slightly more adventurous actions to the right. Viki’s 0.57 interceptions per 90 are fewer than Beattie [0.92) and Leah [1.17]. However, Viki makes 1.24 tackles per 90, compared to Beattie (0.92) and Williamson (0.86). 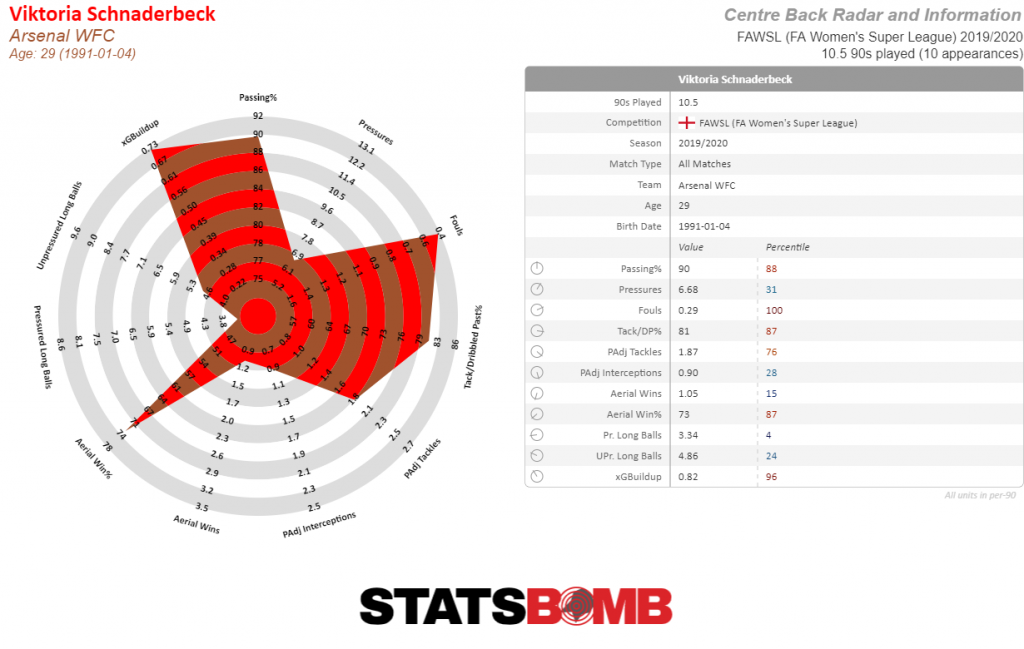 In Montemurro’s two and a half years as Arsenal manager, it has become clear that he favours adaptable players, capable of operating in a number of roles and tactical functions and Viki fits this mould very nicely. Ultimately, she can step into either Leah or Beattie’s centre-half role and operate as a full-back or a wide centre-half in a back three.

Perhaps Montemurro decided against playing her as a midfielder because her defensive style is slightly more reactive with her preference for tackles over interceptions. Her height makes her valuable in defence- she wins 73% of her aerial duels, which is only bettered by Katie McCabe and Lisa Evans in the Arsenal squad. However, with 1.05 aerials wins per match, she engages far less than Beattie- who wins 2.46 headers per 90- and Leah- who wins 1.29 headers per 90.

Viki’s style is very much to push off and carry the ball forward in possession, where she usually looks to find Katie McCabe in more advanced positions at left-back. As a defender, she is more stand offish and calculated about when she engages with opponents. Largely, it’s her technical security that Joe favours and one of the reasons she has amassed 1520 minutes this season.

I read that Bronze and Greenwood are signing with Manchester City, and apparently Chloe Kelly is going to do the same. With their signings, ManCity and Chelsea are putting a lot of pressure on Arsenal to raise its game a notch!

Thanks, Tim. Very interesting, chimes with the impression I had of her.
This is a perfect example of the squad depth we are after – a player who, while not the absolute best in the position, is up to the standard we demand of an Arsenal Women defender and adds something unique to the role.
One of my favourite players.

These passing stats are facinating. I think as a CB her passing % is best in the team because besides the game at leftback, I remember the game we all like to forget where she played as a RB and I think her passing numbers were very low at that day. I think that playing her at fullback is interessting in tactics point of view but if I am honest I never ever want to see her play as a fullback against Chelsea again :). I hope that since rumored players to join us seem to be also fullback kind,… Read more »