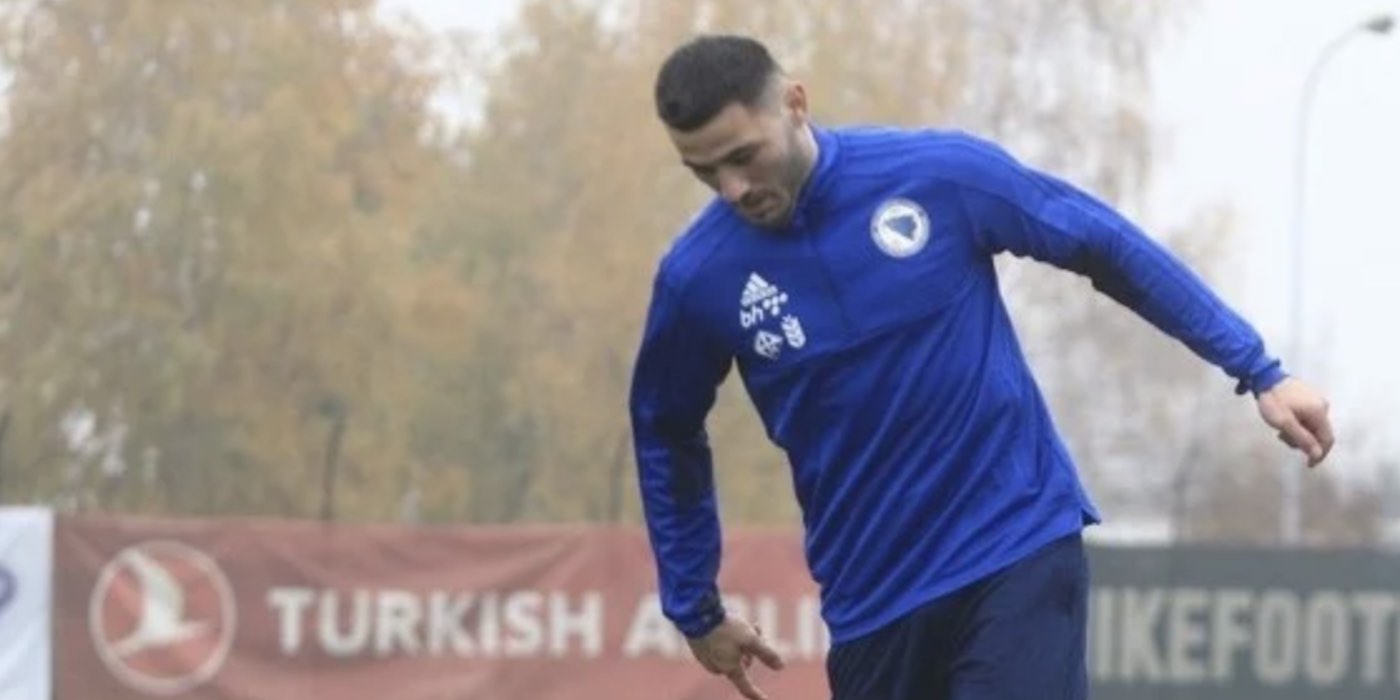 Sead Kolasinac has become the second Arsenal player during this international break to test positive for Covid-19.

The defender was tested this morning ahead of Bosnia-Herzegovina’s clash with Italy later today, and produced a positive result.

He joins Mohamed Elneny as someone who will now have to undergo self-isolation/quarantine as per the protocols.

It’s another headache Mikel Arteta will have to deal with ahead of Sunday’s game against Leeds and Europa League action in which Kolasinac was sure to have been involved.

The Arsenal boss will be hoping that the other players involved in internationals this week come back healthy and uninjured. The list includes Bukayo Saka, Hector Bellerin, Granit Xhaka, Nicolas Pepe, Pierre-Emerick Aubameyang, Gabriel, Alex Runarsson and Eddie Nketiah, who were all involved with their countries at various levels.

He will also have to deal with a situation involving Willian who flew to Dubai, although the player’s camp are insisting it was a business trip to fulfil image rights in Asia, if you can make sense of that.

Nevertheless, he was pictured with the salt sprinkling meatwanker known as ‘Salt Bae’, and it did not look as if social distancing protocols were being followed.

The club will, no doubt, seek clarification, and as per Sam Dean of the Telegraph, the Brazilian will have to produce a negative Covid test before he’s allowed back into training.

Let’s keep fingers crossed for all the Arsenal boys on their travels, and as with Elneny, let’s hope Kolasinac isn’t badly affected by the virus.

Arteta: I think this project is going to go bang

I actually don’t hate that midfield…

Yeah, and Helder is an upgrade on Pepe

Leeds are playing Don Revie’s disdain for modernity and Viduka up front so there is no way we’re keeping a clean sheet.

Ah, so a dvd of The Damned United must be starting on the bench.

I wonder if they’ll deploy their ‘A Portrait of James Milner’ which depicts a haggard old port worker and has been hanging in the clubs attic these past twenty years.

Still no place for Ozil then. 🤣

Hahahaha!! Ah, Qwaliteee. You do bring a smile to my face. You’re not actually Mesut are you?

I wish I had a buddy who was as loyal to me as you are to Ozil. Respect dude!

You guys made my day. Rather, my entire international break. Brilliant!

Well, you’ve to have a laugh or two in these trying times – even if it’s at your own expense – and also try to remember that, as much as we all get caught up in the passion of the game, it is, at the end of the day, only a game – and we’re all Gooners together.

Can we come up with some injuries for the next round of pointless internationals before it gets to a player that really affects us badly.

Am I being dumb or has it been a really long time since a fullback from the academy made even half an attempt at a breakthrough into the senior squad? We’ve always had a really tradition of exciting young fullbacks but since Hector about six seasons back, I don’t remember too many apprentices getting pitch time.

Obviously Saka and AMN have both been deployed as such but we haven’t had a specialist RB or LB through for a while. Seems kind of odd. Maybe I’m just being forgetful but I can’t remember any.

Academy graduates breaking into the senior squad has been pretty rare over the past decade (at the moment things look more promising).

I feel like AMN (who has played maybe 90% of his games in either full-back position) and Saka (most of his games at left wing back) is a pretty good return, comparatively speaking.

I realise they don’t always break into the team. But we haven’t had any appearances for Carabou cup games or Europa league games for a long time.

With Kola injured, you’d think there might be the opportunity for a youngster to come in. In any other position this would be the case.

But there isn’t. And hasn’t been for quite some time.

Centre Half is maybe a more glaring absence. Who have we had come through the academy in the past 5-10 years. Miquel played a handful of games, but I can’t think of anyone else.

Zech Medley got a few games in the senior team under Emery at CB and LB. Even though Zech is 6ft5″, I think his best performance was actually at left-back. He showcased a dribbling ability and speed that is not normally associated with CBs of his stature.

If you ask me I think Medley has a better future as a footballer at LB. However I can imagine most coaches see his size and think to only play him at CB.

Having these international games in the middle of a pandemic is irresponsible by the governing bodies.

Get yourself a new scriptwriter, funnyman.

Unless you can catch Covid from Twitter, fortnite or money, I think Ozil will be ok…

That strengthens the squad for the Leeds game then

And no fucking international games.

100%, until covid is around and we play pointless International games, the 5 sub rule should be in play.

Only Issue I have with the 5 sub rule is that the 2nd half is extremely slow, and the game stops far too many time. To make things worse they dont add enough injury time in the end. If they do the 5 sub rule, then we should have +6+7 o r+8 minutes of injury time, not 3+.

How can that be the case? The game is still only allowed to be stopped 3 times to make your substitutions.

You telling me both teams always makes subs same time, and it takes same amount of time to make 6 subs than 10? Really??? Wow

Alternative proposal – just switch premier league games to 5-a-side… likely every team will have enough players for that, at least until the next round of international fixtures

Another day, another player tests positive. Certainly not a positive vote for internationals at this time, although both our players could have got it while still here I guess. Anyway, we’ll just have to deal with it and hope they both recover quickly.

For once, Biggs, we are in total agreement. Well said. 👍

As I said with Elneny, let’s all hope he – and Kolasinac make speedy recoveries.

When it comes to splitting hairs, it’s a flip of the coin. My daughters with their hairdryers- or you.

I hope no one gets covid and everyone is safe, but In a very selfish football perspective, if our players do get covid, can stay safe, isolate, and recover fully, then it might relive some stress of players having to worry all the time about getting covid. I know there are cases where you can get covid twice, but in very rare cases. This means going forward, Arteta, Elneny, and Kola will have a very low chance of getting covid again, and be available. Again, I wish no one gets covid, but if they do, it might be good in… Read more »

Timorous Me
Reply to  Naked Cygan

Yesterday, the NY Times wrote about a study–not fully peer reviewed yet–that shows that immunity likely lasts for most for years, if not decades! If this does play out, that would be pretty huge, though of course there are outliers.

But between that and vaccine info, this has actually been a pretty positive week on the COVID front.

Dave cee
Reply to  Timorous Me

As we read this Salah has just tested +ve for a 2nd time. However, these tests are somewhat dubious as they test to such a low amount of virus in the body that a +ve can be returned in people whose viral loads are basically negligible and who are in no clinical sense sick..or who simply have matching fragments of the viral DNA in their system but no actual ‘live’ virus at all.
I’m not trying to deny the seriousness of the virus, just stating that the numbers are somewhat confusing, and that this is not the blackdeath

Willian has gone against the non-negotiables. He should be dropped from the team, contract terminated with immediate effect and then sold back to Chelsea (but we’ll pay THEM a transfer fee even though we got him for free).

Funny that nobody else mentions Borges after he broke the covid rules by going to Saudia Arabia. But some joke about Özil (for what? mystery…). Well, nothing professional from the Brasilian… but will he be the victim of the non negotiables blablabla?

Salibaba and the Forty Thieves
Reply to  Jack

This is actually a great point. What the hell was Willy doing that couldn’t be done virtually. That’s not actually acceptable given the circumstances.

Let’s see if Arteta is still a man of his words.

You forgot Maitland Niles. Not good

At least we can take comfort from the knowledge that he’s unlikely to be able to pass it to anyone.

Jokes aside hope he recovers soon. If any player gets seriously affected then then UEFA and FIFA will have a to answer for. Ridiculous that they are having to travel and play these games.

Players unions around the world should have told FIFA/national FAs that international friendlies were unacceptable this season.

I guess we just add that to the ever lengthening list of things that Kolasinac can’t defend against.