Kit leak specialists Footy Headlines have produced a first take on what they think could be the design of Arsenal’s home shirt for the 2021/22 campaign.

There’s nothing particularly surprising about the shirt being red with white sleeves, but as always, the devil is in the details, which the report thinks are 70% correct.

For starters, it sounds as though we’ll be returning to the same shade of red that adidas used for the popular 2019/20 shirt. And, judging by the image, the v-neck collar will also return. 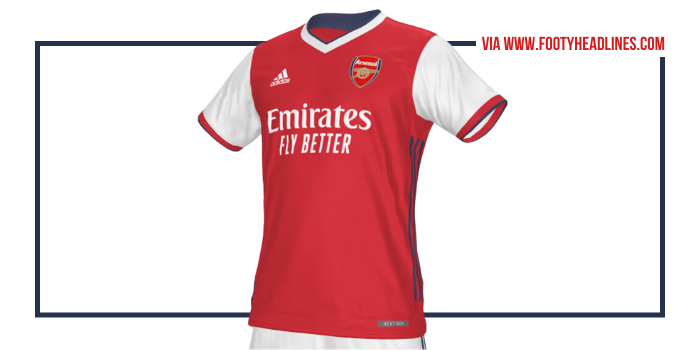 The adidas three stripes are set to be navy and could be positioned in the same position as the current home shirt, down the side of the body.

All in all, the mock-up looks pretty smart.

No doubt, further design flourishes will become public in the coming weeks and if last season is anything to go by, the kit could make its debut on the pitch before the season is out.

Back in December, the same site confirmed the away kit colour will be ‘pearl citrine’ and the third kit will be ‘mystery’ blue.

That’s definitely a shirt we can win the title in.

Can’t say I am a huge fan of the blue trim on the sleeves.. perhaps it will look better once in person..

Whenever I see ‘fly better’ on an Arsenal shirt I always think of the toy story line “This isn’t flying, it’s falling with style”.

It’s “Emirates – Fly Better“ now and it’s even bigger than before.

Not gonna happen anytime soon as our stadium is called the Emirates, and I’m sure there’s a fair way to go on that deal yet. As logos go its fairly bland and reasonable imo, could be a lot worse.
What would you prefer?

JVC or Dreamcast would be nice 😉

Think we can all agree on that!
Doesn’t help that every other man and his dog has Emirates these days. It is bland. Bring back O2 I say, it’ll get us back to the top.

Never liked O2 on a home shirt, fine on away kit though.

Murphy was an Arsenal Fan
Reply to  lessthanthesumoftheirparts

We were winning the League at the Highbury. We would win again at the Ashburton Grove. Hope we can drop that horrid name.

Timorous Me
Reply to  Boris Rados

What Chinese betting company are you hoping to replace them?

I actually kind of liked the aesthetic of Fly Emirates, but the Emirates — Fly Better logo isn’t as good for sure. Better than some team’s sponsor logos though.

I like their 3 logo – reminds me of how many we scored past them last time!

Quite nice, pretty safe not as funky as the first 2 offerings

I waited years for a return to adidas kits only for them to do this terrible stripes-on-the-ribs thing. The stripes should be on the sleeves.

Are we no longer visiting Rwanda?

Their government caught a lot of flack for spending money on that deal. Wonder if it had to go away

No one’s been visiting anywhere for a while..

It’s rather meh, if you ask me. The first and especially this years kit have been excellent but that one looks pretty ordinary.

Inclined to agree. I love the boldness of this year’s design, by comparison that’s far too safe for me. It looks like the bare template you’d have for an arsenal shirt before you actually started designing anything on it.

I have liked the previous Adidas kits but this is Puma level. It gives me the feeling that they are just changing it because it’s a new season and need another thing to sell.

Billy bill and the billy bunch
Reply to  Dave

Arsenal alternate the shade of red each year- the crest has two halves, one a darker red and one a more orangey red, each year the home shirt alternates between those two colours.

I learned something today, thanks for that. 😊

Looks class, I like it a lot more than this season’s kit.

Is “pearl citrine” a fancy way of saying “yellow”? If so, great news

Billy bill and the billy bunch

I like it! Simple, classic colours. I like a collar though, you know so I can wear it under my sport coat, with a tie.

70 percent. So.. probably red, not sure if it will have sleeves?
..sorry, just such a weirdly specific number 🙂

Remove sleeves and it will help us stay onside with VAR?😃

I would love to see Tierney tuck in his ’21 official away wifebeater!

Is this news? this site is becoming a joke