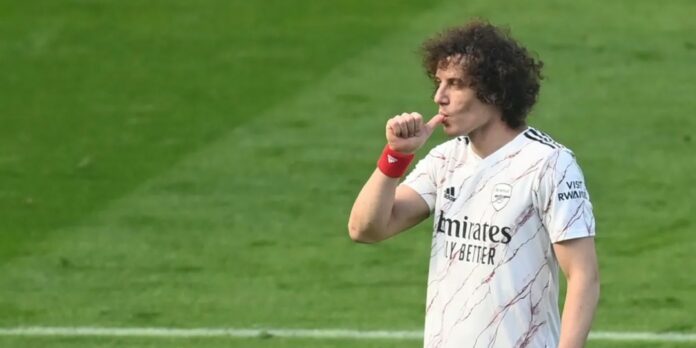 Arsenal have revealed that David Luiz will not be available for tomorrow night’s clash with Liverpool due to discomfort in his right knee.

The seriousness of the problem remains to be seen although James Benge reports that the Brazilian has been training this week while also undergoing a number of tests and seeing a specialist.

Luiz has been a regular starter since mid-January, featuring from the off in nine of Arsenal’s last 12 Premier League games.

David Luiz out of Saturday’s game to Liverpool, Arsenal confirm.

In addition to squad update I’m told that Luiz has been for several tests on his knee this week and saw a specialist yesterday. He has still taken part in training this week though.

Mikel Arteta also has a few potential headaches in midfield. Bukayo Saka sat out the Interlull with a hamstring injury and looks unlikely to be part of Saturday’s squad. The 19-year-old only made it to half time of the North London derby on 14 March and seems to have played through the issue for 74 minutes against West Ham six days later.

Of those returning from international duty, Emile Smith Rowe, off the back of two games for England’s under-21s, has a hip issue that the Gunners are monitoring and Granit Xhaka, who played three games for Switzerland, is unwell. The 28-year-old missed training today.

In better news, Willian has recovered from a calf issue and will be available.

In better news my tv, pc and phone all broke so I wont know the score

In even better news you can post on internet forums without any technology.

You won’t be able to read how Joe Montemurro reacts to Liverpool defeat.

Big players out but for the first time in a long time I think we have decent replacements for all .. except Xhaka maybe 🤔

Internationals have robbed us

How is Willian recovering better news 😅
He’ll just take up valuable playing time that could be used to blood Martenelli or Nelson. Poor Pepe gets dropped for Willian even after performing well.

Or a bit of stirring?

I watch one of the training videos where Willian, Aubameyang, Laca, Martinelli where doing shooting practice. Willian scored all his shot. So I guess that’s why the Coach always picks him. He is a god in training.

Good in training – shit on the pitch = good at wanking – shit in bed.

But apart from that news it’s all looking great …

Ah great …… Willian is back😳

Is it just me or does anyone else agree that there is some kind of obsession with playing Saka all the time , injured or not.

The obsession is playing Xhaka all the time, shit or not

I see us resting a few players who have been involved in international duty considering the more important match in Europa league on Thursday – Odegaard, Saka, ESR, maybe even Partey. Expect Willian to start of fit.

We’ll see, but getting European qualification via the PL is looking increasingly less likely (although still not impossible) so trying to win the EL this season is assuming an ever higher priority. Let’s just hope we don’t fall between these two European options and end up with neither at the end of the season.

Curious to see who plays right-back; it seems Bellerin, Cedric, Chambers all have a pretty equal chance.

I’d be tempted to play Chambers at CDM for extra defensive solidity at the base of midfield and he can slot into defence if our full backs are further forward. Speaking of which, I’d favour Bellerin for this one due to his pace. I think most of our chances will come from counter-attacks. With Luiz and Xhaka both potentially out, while we may be less error prone in our defensive third, we do lose their ability to spray diagonal balls to our wide forwards. Neither Elneny nor Ceballos have been consistent with these kinds of deliveries. Also I would be… Read more »

Chambers too slow for full back in my view. Right back is a straight choice between Hector and Cedric. And Cedric is edging it for me on current form.

I’ve a feeling we could see Bellerin RB and Cedric LB. Chambers is good against physical teams, but he’s always struggled against tricky wingers and Mane is exactly that. Tierney played all of Scotland’s games in the break and probably needs a rest for the EL, while Cedric as an inverted LB could be useful in stopping Salah cutting inside onto his left.

There is no good news, just bad news and irrelevant news. 😉

Why is Xhaka so irreplaceable

I mean… 3 coaches with different philosophies couldnt bench him

A Different George
Reply to  Nursing_father

And Switzerland play differently than any of Arsenal’s coaches–and he always plays for them as well. It may be–I know this is a revolutionary thought–that professional football managers, who have spent their entire lives watching and evaluating players, know more about the game than we do.

All we need now is an announcement that VVD is fit for selection and I can get to hammering the coffin shut.

So, while others are injured doing national duty Luiz did what, slipped in the bathtub?

Whilst having a “rub a dub tug”.

I don’t know in what world the better news is that Willian has recovered from his injury?!

Irrespective of who it is, when you start wishing injury on Arsenal players you should probably have a word with yourself…

I think it was a bit of humour to brighten our weekend. To be fair, I’m still smiling.

My god the comments section is so depressing, not a single positive one so far.

We’ve got a great chance at beating Liverpool and players competing in every position.

A few injuries makes it more likely you’ll see the likes of Holding instead of Luiz, Ceballos / Partey partnership instead of Xhaka / Partey, Pepe instead of a tired Saka.

Isn’t that what you guys have all been wanting for ages?

It’s not all doom and gloom at The Arsenal.

As for Willian, he’s not my favourite and he was poor at the start of the season but now he’s been playing to a good standard for a while now. No need to continue with the hate. I wish the best for him and want him to perform well.

Let’s hope mate. I’ve got a patent on Arsenal, Burnley and Chelsea to win. COYG.