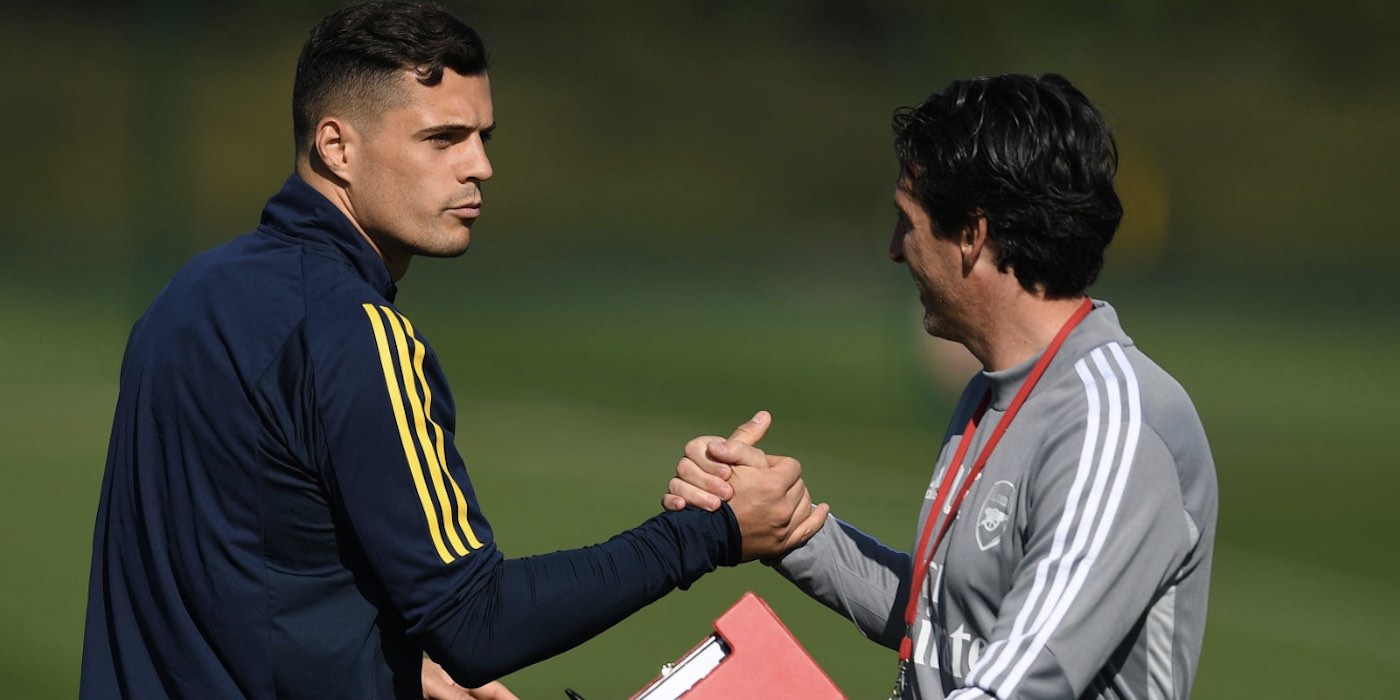 Unai Emery says he’ll decide tomorrow whether Granit Xhaka will be part of the squad that faces Southampton on Saturday.

The Switzerland international hasn’t featured for the Gunners since his falling out with the Emirates crowd at the end of October and has been stripped of the captaincy.

Newcastle United and AC Milan have both been touted as potential suitors should Xhaka be put up for sale, however, the coach thinks the 27-year-old’s reputation can be rehabilitated.

“He is coming back better in his mind, his mindset is better to help us and to be closer to playing when we need him,” Emery said on Thursday.

“I spoke to him this morning and we had a very good conversation.

“My objectives don’t change from when I spoke to you before.

“My objective is going to be his comeback to help us and convince every supporter of his commitment with us and his performances will be better and they will be proud of him in the short or long future with us.

“That is my objective, and what I am working towards.”

Arsenal play a lot of football between now and the January transfer window opening, so it makes sense that Emery wants a player once deemed the first name on the team sheet to be available for selection.

With Dani Ceballos out for three weeks, we’re one more injury away from being quite short of cover in the centre of the park.

Xhaka’s latest comments suggest he is not best pleased with the way the club have treated in recent weeks and could well be leaning towards an exit. Emery insists that is not the case.

“He is feeling better and also feeling that his team is Arsenal now,” he said.

“He wants to come back with confidence with the supporters, and we are going to decide. But I think little by little we can help him come back and connect with us and our supporters.

He added: “We are going to decide tomorrow [if he’s in the squad] but I want to do that comeback, give him confidence and make him comfortable. And when we can connect with our supporters with a good moment and a good performance and being strong with them.”

It is a must, we are too short in numbers. But positionally, tactically and mentally a different question.

Even for an outsider like me, its fairly clear that Xhaka wants to leave.

I know Emery may not see much options beyond Xhaka for the midfield (another point that a lot of fans don’t understand Emery on) but to say he had a good conversation with Xhaka…!

“I know Emery may not see much options beyond Xhaka for the midfield”
Is Torreira really that short that Emery can’t even see him?

More PR rubbish from Emery. There seems to be a surge in denial at the Arsenal presently. I’d think a bout of honesty may help. For example Emery saying, he’s made many mistakes himself recently and the players need to look like they give a shit instead of dropping like lemmings.

Can’t wait for one of these “strong moments” he keeps promising.

Yeah that’d be a no from us the fans

If you’d invented a parody club with a fake internet presence, it would be indistinguishable from what we’ve become.

We are Spinal Tap FC. All we need us Emery now to tell us we’re turning it up to 11..

This is just painful now.

It’s always Emery deciding tomorrow or next week or whenever. He’s had 3 weeks for fucks sake. Either he’s available for selection or he is not, in which case he needs to go.

They’re both finished at this club. It’s just a matter of timing ……

Strangely looking forward to the Emirates on Sat, should be an interesting vibe.

No, just no. Xhaka is done.

His words are the verbal equivalent of nails on a chalkboard.

Unfortunately, I have bad feeling that things are only going to get worse.

Two wins in a row?

Fans: For Fks sake, sack him

Emery: (After Southampton game) Today, we did not get result we want, but in the moments we have a good situation for win our next match with good tactical focus.

Fans: For Fks sake, sack him

Silly self inflicted wound by stupid Arsenal fans. Right cretins. As if our midfield was not having issues already, they decided to exacerbate the matter. Now we have even thinner choices in deep midfield. Its not as if Torreira and Guendouzi have suddenly combined and we have suddenly assurance in midfield again …hardly if not the reverse. Arsenal fans don’t think and they do not want to confront the obvious. They’ll shift the goal post blame something-else. Which is why they are continually upset that things are still not improved. Frankly clueless. Unai has to come to grips with midfield… Read more »

Since Giroud left , teams set up to allow us to cross the ball, knowing our strikers can not aerial threat like Giroud. Either that or let kola cross the ball.

say xhaka plays,
he doesnt do too much wrong and for him has a standard game.
we lose because of the system, square pegs for round holes.

xhaka might get a bit of confidence back, having played 90 mins or whatever.

say xhaka doesnt play,
we have a more dynamic midfield and beat southampton.

the team gets a massive confidence boost.

I’m not saying playing xhaka means we lose automatically, he can play football better than most of us.
but I know what ive seen and whenever he is deployed under emery it just hasnt really worked.

What dynamic midfield? Have you seen the last games?

willock, guendouzi and torreria are all more mobile than xhaka

He is making the situation so much more of a drama than it needs to be. If you have to play him then do. I would rather Xhaka was moved on but it’s a few weeks until January so in the meantime, just get in with the football. I can imagine after we lose a few games between now and then so hopefully both will be gone.

Maybe he is hoping that the supporters will be so busy giving Xhaka crap, they’ll forget about him?

The writings on the wall for Xhaka + Torreira, that’s going to put a lot of pressure on Edu to identify 2 central midfield replacements of real quality from somewhere.

We need stability, but the high turnover of playing staff looks set to continue.

We should get £80mill for Xhaka+Torreira, not sure what type of replacements we’d get for that type of money? But we need to identify two who can hit the ground running.

All these fans speaking pompously as if we have great alternative options in midfield. We are so thin on resource at the moment. If Granit isn’t back in to help at least till January, none of the alternative pairings of Guendouzi-Willock, or Guendouzi-Torreira or Guendouzi-Ceballos(now injured) anymore convincing. Still side to side passing, lack of midfield control and in Willock’s case (in defense of him he is understandably young) plenty of stray passing. Add to that the inefficiency of the forward line (Just one shot last match…let that sink in) and you have a wholly unconvincing function between midfield and… Read more »

The same way you wanted Koscielny to stay?

I guess they think it’s time, for me to give up They think it’s time They can picture a time without me Without Wenger’s mark still on our defence Oh man But I’ve got a fist of pure devotion Got a week of shattered ebenings I’m not gonna leave it, gonna leave it all behind yet Xhaka whatever they said, whatever they did They didn’t mean it I just want you back for good (Want you back, want you back, want you back for good) Without you it’s wrong The midfield is strong, and Torreira He’s saying he doesn’t like… Read more »

Ha, thanks. I was bored, on a train, with a patchy memory of the song.

Upon reflection this morning, I like to think the scanning issues make it feel even more Emery.

When does Emery have anything but a “very good conversation”? (When he’s having a “perfect call”, I suppose)

Seriously, Emery is just compounding the problem he helped create with the botched captaincy decision. Pushing Xhaka back in the squad isn’t necessarily going to work out the way he hopes.

Just a little bit more rope. This guy is ready to finish himself. Fool.

Changing the subject ,I just had a thought,,,, enemy’s record against pep and mourinho he hasn’t got a win against any of them,,,, that mean we not gonna beat the sp*ds while we got Emery as manager???

Need Xhaka to maybe make a comeback in an away game, less supporters to give him stick. If he is going to be around, we need to use him and probably best to nurse his re-intro to the Emirates with a couple of fine away performances.
Ideally though, he should be gone in the next transfer window.

My biggest fear is now with Emery saying this he will play Xhaka.
Please Emery just TRY this lineup and see what happens:

Sounds like our best lineup and sth that should be given a few matches to really gel.

Think my local kebab shop should be called Xhaka.
expensive , slow and it gives me the shits.

At this point I think he needs to just do a media block out for everyone’s sake. He’s become a caricature. I’m partly waiting for John Cleese to show up and smack him round the face every time he speaks.

But we don’t want him to make a comeback, Unai. Take him please and you can both go to Sevilla and make a legacy there. Close the door on the way out.

I quite enjoyed the international break…. first time I have ever felt this…. not sure if I want to go back to the frustration that comes following watching an Arsenal match… oh well… at least I have another couple days to enjoy the peace and quite

Emery’s ability to do and say absolutely the wrong this at every successive turn is becoming an art.

I was delighted with the summer but my opinion of Sanllehi is nosediving by the day.

I was critical of him at the time (and the way he ultimately behaved was wrong) but man, now all of our off-field mess has been made public, I really want to hear Koscielny’s side of the story regarding his departure. He clearly knew something wasn’t right…

Eboue's step over
Reply to  Mother

Good article in the athletic recently, it gives his side pretty well.

And we’re being asked not to show any anger towards this bell-end. Nails down a blackboard. Dentist drills. Non-stop Phil Collins. Unai Emery soundboard. MAKE IT STOP.